In December 2015, the Chinese authorities launched a sustained and coordinated attack on civil society labour organizations in the southern province of Guangdong. Several activists were arrested and the organizations they worked for were disbanded. This brought to an end a crucial period in China’s workers’ movement (as outlined in previous China Labour Bulletin reports) in which civil society labour organizations essentially did the work of the trade union in building worker solidarity and helping to resolve disputes through collective bargaining with management.

However, as one door closed another one opened. In July 2015, the ruling Communist Party of China (CCP) ordered the country’s official trade union, the All-China Federation of Trade Unions (ACFTU) to initiate a series of reforms that would enable it to do a better job in representing ordinary workers and thus help address long-standing social and economic inequality in China. 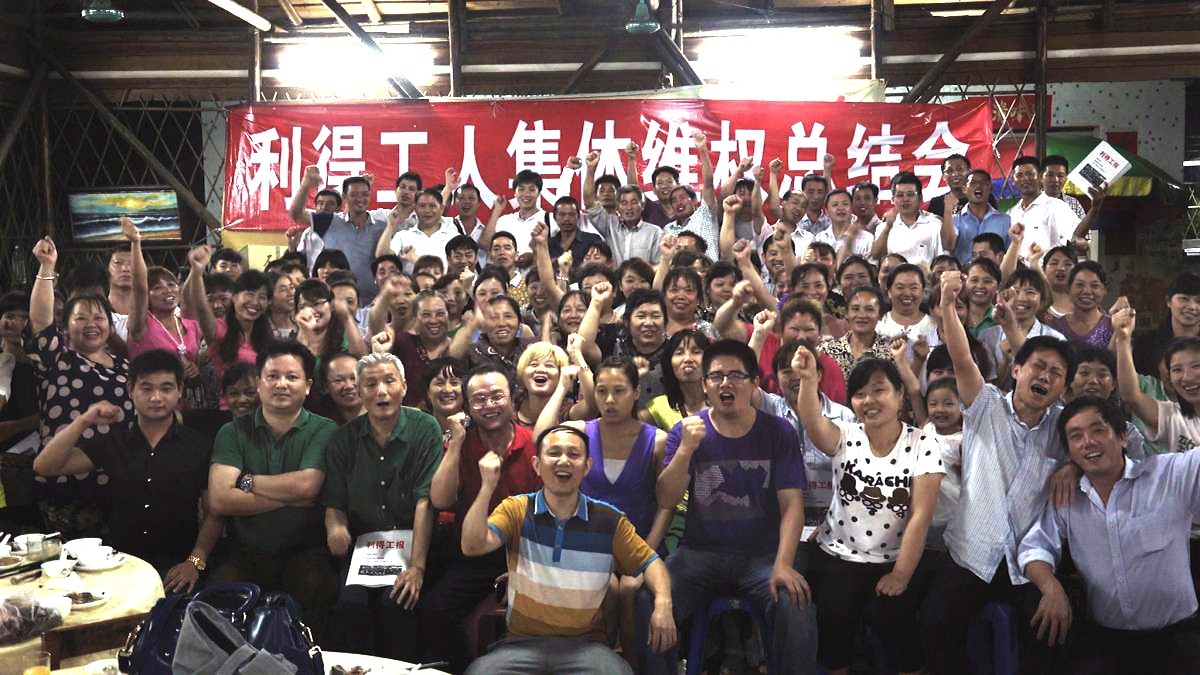 Workers and labour activists celebrate victory in the Lide shoe factory dispute in the summer of 2015. Photo taken from the documentary film We the Workers.

In China Labour Bulletin’s latest (Chinese-language) research report on the workers’ movement in China (中国工人运动观察报告2015-2017), we examine the key developments in worker activism, civil society, trade unionism and government policy from 2015 to 2017. It was a period in which labour conflicts continued to erupt over an increasingly broad range of industries, within the construction and services sectors in particular: ordinary workers struggled to make a decent living and the CCP realised it had to take concerted measures to tackle the massive disparity between rich and poor that was threatening to destabilise the country.

The report comprises three sections. The first uses the 6,694 cases recorded on CLB’s online Strike Map during this three-year period to analyse workers’ collective actions and identify trends in the workers’ movement. The data illustrates how the lack of an established collective bargaining mechanism and the absence of an effective trade union at the enterprise level meant that workers had no option but to stage strikes and protests when their fundamental labour rights (to be paid in full and on time, to receive social insurance and severance pay when laid-off, etc.) were violated. The second section looks at how the work of civil society labour organizations showed the way forward for effective trade union representation by organizing and training workers, electing bargaining representatives and helping to turn wildcat strikes into productive negotiations with management. The third section shows how the CCP’s attempts to narrow the wealth gap in China will require the ACFTU to become a genuinely representative organization that can improve the lives of ordinary people. Up to this point however, the ACFTU’s efforts have fallen well short of the Party’s expectations. In the concluding section, CLB offers several constructive suggestions on how the ACFTU can further deepen reform.

In conclusion, China Labour Bulletin argues that the ACFTU can no longer merely indulge in superficial structural reforms which in reality do more to protect its own vast self-interests than China’s workers. The reforms undertaken so far do nothing more than demonstrate the need for genuine trade union reform. It is now absolutely essential that trade union reforms allow workers to reclaim ownership of the union and for the union to represent workers (not itself) in collective bargaining with employers at the enterprise level. The union needs to be led and driven by those who believe in the core values of socialism — equality, justice and democracy. Only in this way can the trade union, long divorced from the workers’ movement, become a genuine member of China’s family of workers.

The report 中国工人运动观察报告 2015-2017 is published here as a PDF. Selected English-language extracts will be published in due course.