Around 6,000 workers in the southern city of Zhuhai have been on strike since 29 March after learning that their employer Flex, a NASDAQ-listed technology company, plans to sell Multek, its Chinese subsidiary, to MFLEX, a subsidiary of Suzhou Dongshan Precision Manufacturing (DSBJ).

The workers, based at five Flex plants in Zhuhai, say they have been kept in the dark about the ownership transfer deal and are demanding guarantees from Flex that their long-service benefits will be protected.

The strike is one of the largest in China since thousands of angry coal miners in the north-eastern province of Heilongjiang staged mass protests demanding the payment of wage arrears in March 2016. 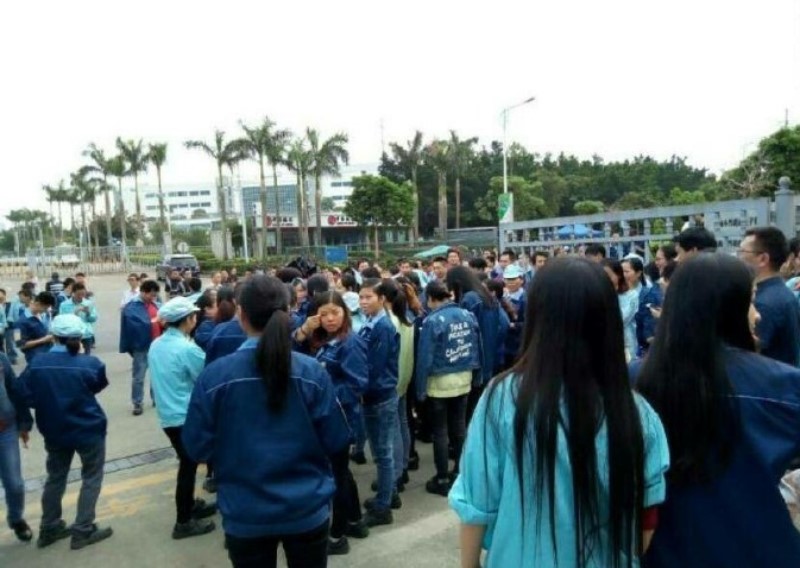 Flex employees on strike in Zhuhai

In an open letter to the company, the workers complain that they have been sold just like equipment on the factory floor. “We are thankful to the company to which we have devoted our most productive years,” the letter reads. We “have been proud to work here,” but lament that there has been “no communication whatsoever regarding the deal.”

“What would there be left for us to do if the new bosses decide to get rid of us?” demand the workers in their letter.

They are also keenly aware that strike action is usually the only way to ensure that their rights and interests are protected. There have been numerous similar cases over the last few years where workers at multinationals have successfully staged strike action after the company announced a sale to a domestic company. In nearby Shenzhen, for example, more than 1,000 workers at IBM went on strike in 2014 when the company announced the sale of its x86 computer server business to Lenovo.

The management at Flex has stressed to the workers that there is no need to sign new contracts because the Zhuhai subsidiary’s name will remain unchanged after the transaction. “Salaries, benefits, and length of service will remain the same,” François Barbier, global operations president at Flex, has stated.

The company also initially pledged that there would be no retaliation against striking workers but then warned that employees who had not returned to their posts by 4 April would be subject to “severe measures according to relevant legislation and company regulations.”

There have also been reports of violence in and around the factory and of workers being beaten by thugs. One incident involved a worker being beaten by a dozen security guards and chased into the middle of the road in front of the factory gate, potentially endangering the worker’s life. In a handwritten poster, workers also accused management of confiscating staff cards and of locking them out.

Videos of scuffles between workers and security personnel have been circulating on social media for more than a week, although most were quickly censored.

As is often the case in these disputes, the enterprise trade union was absent and offered no support to the workers. As the strike enters its third week, however, it is imperative that local trade union officials take a more constructive role in resolving the ongoing dispute by bringing management and workers to the bargaining table.