Strikes and worker protests in China increased noticeably during the third quarter of this year as the manufacturing sector in particular continued to stall. CLB’s Strike Map recorded 593 incidents during the quarter, 219 of which were in manufacturing.

China’s manufacturing activity contracted for the second consecutive month in September, according to the official purchasing manager’s index. This contraction was clearly reflected in greater unrest on the factory floor, with nearly three strikes and protests, predominately over wage arrears, every day in September on average. See chart below. 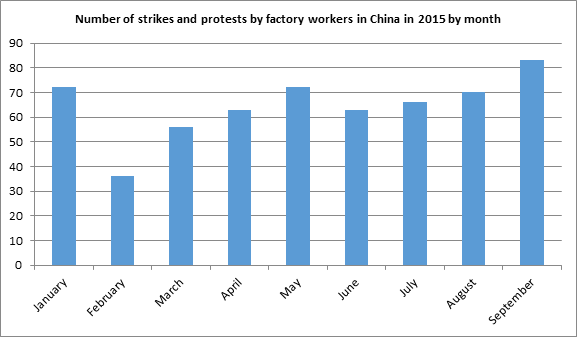 Many of the disputes in the manufacturing sector were related to relocation, closures and sell-offs. In early August, for example, 2,000 workers demonstrated for seven days outside the headquarters of a paper factory in Yongzhou, Hunan, protesting management’s failure to announce compensation plans for an impending factory closure. 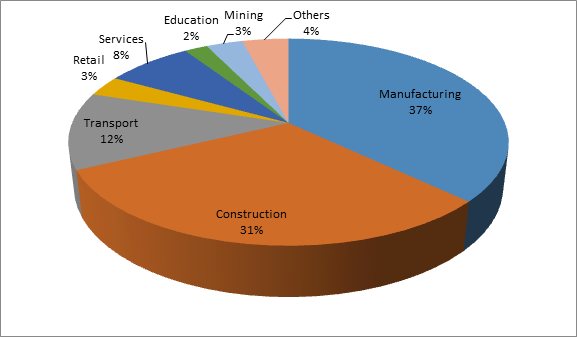 The retail sector accounts for a relatively small proportion of labour disputes overall but here too there was a clear increase in the number of protests. As in the manufacturing sector, retail workers organized in the face of store closures and to fight for better compensation. Tesco workers in Beijing protested in front of their store after its sudden closure in early August, and demanded more than twice the level of legally mandated compensation. Weeks of protests also erupted at a Tesco in Hebei after the store was sold to competitor Wumart.

There was also an upsurge in the number of disputes involving employees of the State Grid as the state-owned power company sought to push through an unpopular wage reform policy that would disadvantage the lowest paid. There were at least 12 protests during the quarter in which State Grid employees from across China demanded wage increases and equal pay for equal work.

There were signs during the quarter that workers were becoming increasingly desperate to get their demands met. Many groups of workers climbed to the rooftops and threatened to jump, with six such incidents in the manufacturing city of Dongguan alone this quarter. In the Zhejiang city of Jiaxing there were three incidents in the span of just ten days, causing some to dub it “the jumper city.”

Police interventions and arrests in labour disputes also increased, with arrests being reported in ten percent of all incidents in September. In one case in Henan on 23 September, there were reports of shots being fired when police used force to break up a group of about one hundred miners blocking the road in a protest over wage arrears.