In his opening speech to the 19th Party Congress in Beijing, General Secretary Xi Jinping called on China’s trade unions to engage in tripartite negotiations with enterprises and the government so as to “build harmonious labour relations and ensure that workers get a fair and decent income for their endeavours.”

If there is one company in China that is crying out for this kind of constructive trade union engagement it is the world’s largest retailer Walmart, where workers have long struggled against declining wages and abusive management.

The notoriously anti-union Walmart did allow China’s official trade union, the All-China Federation of Trade Unions (ACFTU), to establish union branches in its stores in 2006, but the ACFTU has so far failed to support Walmart’s workers in their increasingly desperate struggle for better pay and decent work.

In a new report out today, China Labour Bulletin examines why the ACFTU has been so passive and asks what does the future hold for trade unionism at Walmart and the retail industry in China as a whole.

The report, China’s Walmart workers: Creating an opportunity for genuine trade unionism, tracks the varied forms of collective resistance used by Walmart workers in China over the last decade, with a particular focus on their campaign against the implementation of a new flexible working schedule in 2016, which led to strikes, legal action and a massive upsurge in online activism. 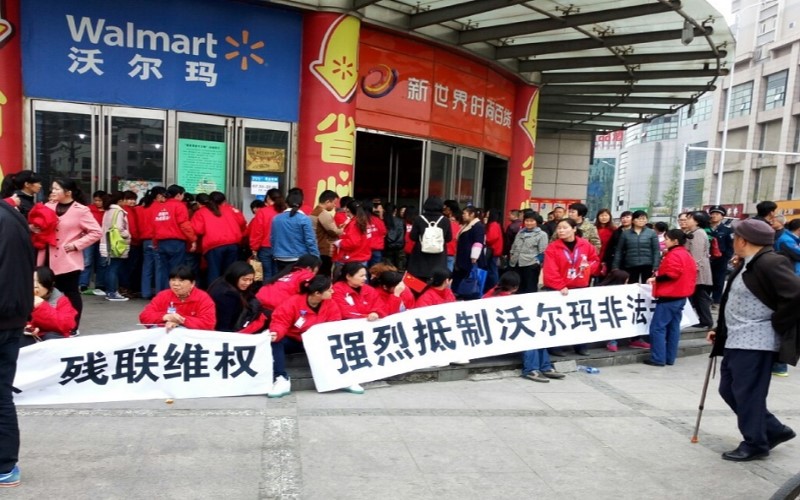 Workers stage a sit in at a Walmart store in Hefei, March 2016

While not always successful, the collective actions of China’s Walmart workers demonstrated a strong sense of collective identity and a growing determination to defend their rights. They also clearly exposed a glaring lack of trade union support, a deficiency that many Walmart activists now are focussed on rectifying.

Worker activists at Walmart are encouraging employees to get involved in their store trade union so that it does become a genuinely representative body. This combined with political pressure from the very top of the Communist Party, the report argues, will eventually lead to an effective trade union presence at Walmart that can bargain collectively for better pay and conditions with management.

As CLB’s Director Han Dongfang points out in the report’s conclusion:

If Walmart continues to resist its workers’ legitimate demands, the Chinese Communist Party, in order to maintain its own legitimacy, will have to stand with the workers and against Walmart.

Of course, Walmart could choose to leave China altogether but if it wants to stay then it will have to abide by China’s labour laws and give its employees the decent pay and decent work they deserve.