The number of worker protests in China fell, as expected, last month because of the Lunar New Year holiday. Nevertheless, almost as soon as the week-long break concluded, workers went out on strike again.

China Labour Bulletin recorded a total of 32 strikes and protests in February, primarily in the manufacturing and service industries.  There were 22 protests at factories, mostly in the Pearl River and Yangtze River delta regions, with workers demanding both the payment of outstanding wages and salary increases. 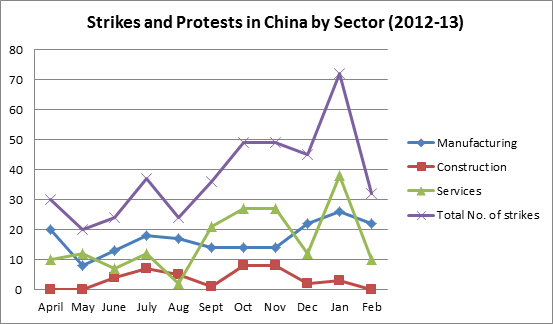 Workers at a Taiwanese-owned factory in Guangzhou that produces shoes for Nike, for example, got an increase in their basic pay from 1,100 yuan per month to 1,300 yuan after going out on strike on 26 February. Workers at Siemens in Shanghai and the Ohms Electronics factory in Shenzhen protested compensation payments and 50 Ohms workers went one step further demanding that their newly elected trade union chairman step down because of his inability to help during the dispute. There were two cases of interns demanding time off over the Lunar New Year, while shoe factory workers demanded time off during the Lantern Festival, the traditional end of the New Year holiday.

Ten of the protests occurred in foreign-owned enterprises and five in enterprises owned by Hong Kong or Taiwanese companies.

With many factories closing for at least a week during the holiday, manufacturing activity was less buoyant than in previous months but still expanded slightly with the HSBC Purchasing Managers Index (PMI) standing at 50.4 in February. Employment levels increased for the third month in the row but there was no change in the rate of job creation, according to a HSBC press release. And Foxconn, the world’s largest electronics manufacturer, announced a hiring freeze last month after nearly all of its employees returned to work after the holiday.

In the service sector, there were transport strikes in Guizhou, Hubei and Zhejiang with drivers demanding fuel subsidies and lower administrative charges. In retail, supermarket employees protested the cancelation of a bonus, staff at a sports outlet protested against wage arrears, and hundreds of workers at a state-owned department store in Hubei demanded the payment of medical insurance and pension contribution from the store, which were reportedly a decade in arrears.

There were more strikes and protests by sanitation workers in February, with cleaners in Guangdong, Guangxi and Guizhou demanding proper bonuses and government subsidies. Following a work stoppage by around 100 cleaners in Guangzhou on the morning of 25 February, local government officials organized talks between worker representatives and management which led to the full payment of a promised 6,000 yuan subsidy.

Despite some success in their protests, striking workers still run the risk of retaliation from management at a later date. For example, five workers who had taken part in a strike at Guangdong International Paper on 19 February said they were fired simply because they had given interviews to the media. They were neither the organizers of the strike nor even active participants in it.

Partly in response to workers’ demands for higher pay, eight administrative regions in China have so far this year announced increases in their minimum wage. At present, Shenzhen still has the highest rate (1,600 yuan per month), followed by Guangdong (1,550 yuan per month) and Zhejiang (1,470 yuan per month).