Why raising the retirement age is a bad idea for workers

It was no surprise that when the Ministry of Human Resources and Social Security (MHRSS) announced in early June that raising the retirement age for workers in China was unavoidable due to people’s longer life expectancy, it quickly galvanized a heated public debate.

In a poll of half a million netizens conducted by People.com after the announcement, over 93 percent of respondents opposed the plan. Those against the plan were mainly ordinary workers who wanted to take their pension as early as possible after years of hard work, and young graduates concerned about their job prospects. 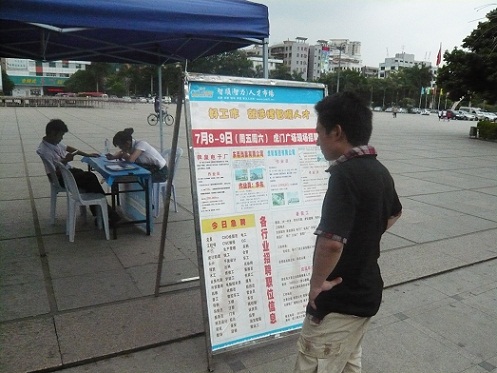 A young job hunter in Humen, Dongguan. Photograph by CLB..

Migrant workers, already underprivileged and disadvantaged, are the arguably the biggest victims of this proposed plan. As a young factory worker in Shandong told CLB, they would have to pay more and wait longer for their pension. A political scientist in Guangzhou argued that blue collar workers in particular deserved to retire early with a decent pension because they have already worked excessively long hours without proper medical care.

The latest Migrant Workers Survey issued by the National Bureau of Statistics showed that over 84 percent of migrant workers worked more than 44 hours each week in 2011 but only 23 percent of employers provided work injury insurance for migrant workers, and only 17 percent provided health insurance.

In contrast, white collar workers such as civil servants, teachers, doctors, who would benefit more from their experiences as they grow older, are more willing to retire at an older age. A white-collar worker at one of China’s most popular internet portals told CLB:

Now Chinese people are able to live longer and enjoy better health. If they retire at the current retirement age, they would feel restless and have nothing to do all day long. They could have contributed more to the society.

But a Shenzhen-based university teacher told CLB that if the retirement age was raised, government policy would be more likely to lean towards old people, which would be detrimental to young people’s employment, their entrepreneurship and eventually the country’s overall competitive edge. He added that:

It’s unfair, especially for migrant workers, if the government wants to fill the widely debated pension gap by asking employees to make longer pension contributions. Instead, I’d rather recommend that the government curtail administrative and social stability spending to make more room for pension subsidies.

Moreover, increasing the retirement age would further exacerbate the disparity between enterprise employees and civil servants. Under the current system, civil servants don’t need to make any pension contribution, but are entitled to receive pension three times as high as enterprise employees, who together with their employers have to make a monthly contribution equivalent to 28 percent of their salary until they retire, according to Liu Zhengjun, an officer at Tsinghua University, during an interview with Investor Journal.

In response to concerns raised by the public, a MHRSS official said on 19 June that the idea of deferring the retirement age was still under discussion and won’t immediately take effect. In fact, the official discussion of this topic dates back to as early as 2005.

The current retirement age in China is 60 for men, 55 for female civil servants 50 for women working in enterprises. According to UN health index published in May 2011, the life expectancy of China ranks 85th out of the 187 countries surveyed, 84 percent of the life expectancy in Japan and one percent lower than that in Malaysia and Thailand.