China’s Supreme People’s Court, in conjunction with the police, judiciary and public health bodies, yesterday issued the clumsily titled Opinion on the punishment of crimes against medical staff and the maintenance of normal medical order (关于依法惩处涉医违法犯罪维护正常医疗秩序的意见).

The Opinion specifies six types of conduct which should be considered criminal acts and will be punishable according to the Criminal Law, specifically: Attacking doctors and damaging public property, setting up shrines and burning paper money (as an offering to dead patients) in medical institutions, restricting doctors' freedom, insulting medical workers, entering medical institutions with illegal arms, and instigating others to commit crimes against medical staff.

The Opinion is the central government’s first concrete response to the wave of highly publicised attacks on hospital staff this year. However, most ordinary people do not read Supreme People’s Court opinions. For the guidelines to be effective, police will need to make arrests, prosecutors will need to press charges, and the courts will need to impose harsh penalties.

The punishments suggested by the Opinion vary according to the seriousness of each offence, with serious offences resulting in jail time but minor infractions could be punished with a fine of just a few thousand yuan – not really a great deterrent. Nevertheless, the Opinion is a welcome first step towards providing healthcare workers with the legal protection they need to do their jobs properly. 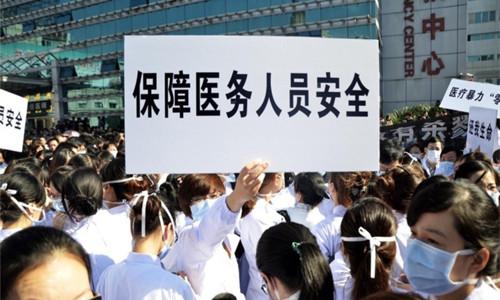 Healthcare workers in Wenling protest after an attack on doctors in October 2013. Photo from Caixun.

In the long term however, as discussed earlier, wide-ranging reform of China’s healthcare system will be needed to reduce the pressure felt by both staff and patients and their families, and thereby reduce the likelihood of attacks occurring in the first place.

And it is important to note that China’s hospitals are not the only places where workers are threatened and abused by members of the public. The country’s overburdened public transport system also leads to regular conflict between drivers and passengers. Bus drivers in Shenzhen say they are routinely abused verbally and sometimes physically by passengers because of the long delays and poor service on the city’s long and meandering bus routes. This, combined with the pressures imposed by the bus companies’ managers, was enough to make the drivers abandon their cabs and march to the local government headquarters last Sunday in protest. So far, however, the authorities have done nothing to address the drivers’ concerns.