Just like many of the cleaners working in offices, hospitals and on the roadside, yesterday’s International Justice Day for Cleaners went by largely unnoticed.

The event commemorates an incident on 15 June 1990 when a group of janitors in Los Angeles were beaten by the police during a peaceful protest against their employer. This year, it was marked by rallies in Britain, Ireland, Holland, Belgium and Finland etc. But most likely, if you did not know about it beforehand, you did not know about it at all.

In Ireland, where the event did at least get some publicity, union organizer Paul Hansard explained: “Basically what we’re looking for is recognition. If you go to a hospital, you know who the doctors and the nurses are, but you’ll never notice who the cleaner is.”

Having spent the summer of 1980 as a toilet cleaner in a London office building, I can personally attest to the invisibility of cleaners: Many of the office workers resolutely refused to acknowledge our existence but thought nothing of leaving the toilet in a disgusting mess because “someone else” would clean it up.

Cleaners, sanitation workers and janitors all over the world face the same issues; hard work, long hours, low pay and a fundamental lack of respect. The International Justice Day for Cleaners is designed to bring those problems to the fore and deserves to get wider coverage and more support.

In China, like many other countries, sanitation workers are taking matters into their own hands and are demanding better pay, benefits and working conditions. As we noted in CLB’s most recent research report on the workers’ movement in China, numerous strikes by sanitation workers in Guangzhou over the last few years have forced the local authorities there to raise wages. 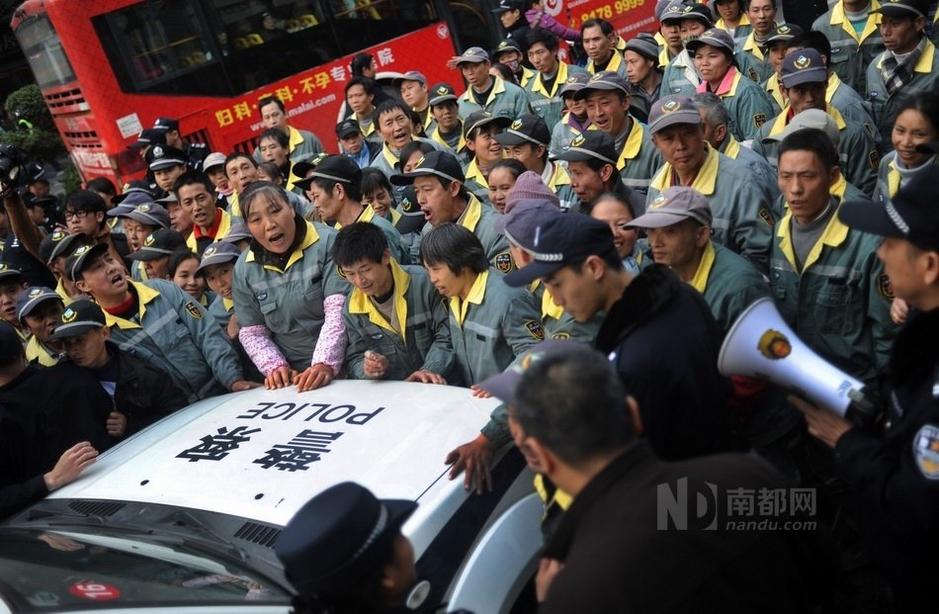 Encouragingly, the Guangzhou sanitation workers did get a lot of support from labour rights groups, students and ordinary members of the public in their campaign for higher wages but  that support needs to be maintained over the long-term because there are still numerous fundamental problems that need to be resolved.

An article in Caixin last week highlighted the case of migrant worker Zhang Shumin and her husband, Liu Yuchen, who spent over 20 years working as sanitation workers in Beijing and live in a tiny room next to the public toilet that they clean. They are now approaching retirement and recently discovered that their employer had never paid the requisite contributions into their pensions.

They only signed an employment contract in 2006 but this at least gave them some sense of security until the contract expired in 2011 and they realized that their employer had reneged on a promise to pay their pension contributions in full. The couple took their employer to court and won. Zhang was reinstated and compensated for her costs but her application for payment of outstanding pension contributions was denied by the Beijing municipal government.

There are countless other elderly sanitation workers in a similar position to Zhang and Liu. The complicated and archaic nature of the pension system means that migrants who spend all their working life doing back-breaking labour for minimal pay will often get no pension at all.

And the situation is even worse for those workers who have already passed the retirement age - 60-years-old for men and 50-years-old for women workers. On 3 June 2013, for example, an arbitration court in Foshan ruled that ten sanitation workers should be paid 20,000 yuan each in compensation for wages in arrears and years of unpaid overtime and social insurance premiums. However, five of their elderly colleagues were refused compensation because they had exceeded the legal retirement age and hence (according to the arbitration court) no longer had an employment relationship with their employer.  After an appeal, the five workers obtained just 5,000 yuan or even less each in a mediated settlement.