A long-running campaign by former and current Walmart workers for improved working conditions and better trade union representation appears to be bearing fruit.

After sustained pressure from grassroots activists, the vice-chair of the Shenzhen Federation of Trade Unions, Wang Tongxin, has reportedly admonished union representatives in the city’s Walmart stores to listen to their members.

“What are trade unions for? We should listen to the workers’ demands and bring those demands to the higher-level unions,” Wang said. “You are heading in the wrong direction!”

The current campaign, led by dismissed Walmart worker activists Zhang Liya, Wang Shishu and Yu Zhiming, focuses on the American retail giant’s plans to introduce a “comprehensive working hours system” (综合工时制) into its stores in China, a move that would reduce the overtime pay for thousands of employees. 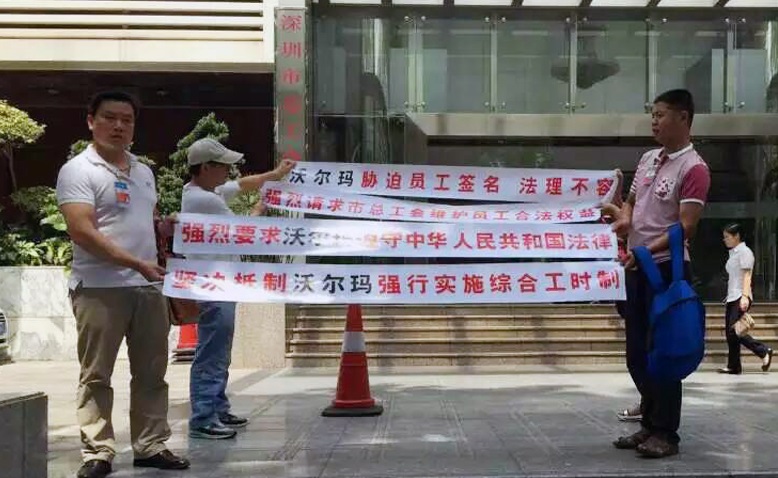 Under this system, employers can demand that employees work longer hours during peak periods (and not at all during other periods) without paying overtime. Similar systems have been introduced in many retail chains around the world but China’s Walmart workers are determined not to let it happen in their stores.

Around 5,000 Walmart workers across China have reportedly joined online messaging groups dedicated to opposing the comprehensive working hours system. In addition, Zhang Liya and his colleagues have targeted the individual store trade unions in Shenzhen, which they say are filled with senior managers and their puppets. These officials are reportedly pressuring workers to sign statements saying they agree with and support the new working hours system.

In an open letter to the All-China Federation of Trade Unions (ACFTU), the Walmart workers asked the union to stand up to the American company’s attempts to violate the rights of Chinese workers, and push for trade union reform and democratic elections in every store.

Meanwhile, Zhang Jun, a former Walmart worker and union rights advocate who now acts as spokesman of the Walmart Chinese Workers’ Association, sent a letter to his brothers and sisters in the American unions asking for support and solidarity.