Police moved in on Friday 21 March to remove the 143 workers had been picketing a Walmart store in the central Chinese city of Changde for two weeks, after management announced 4 March that the store would close down on. Several workers were injured. See photos below.. 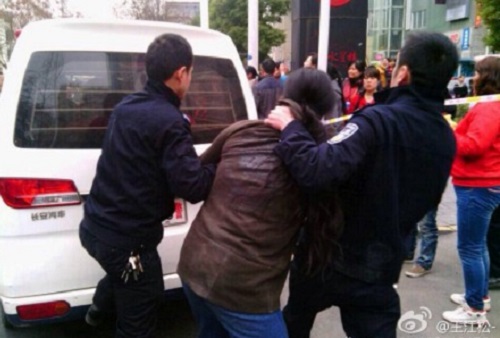 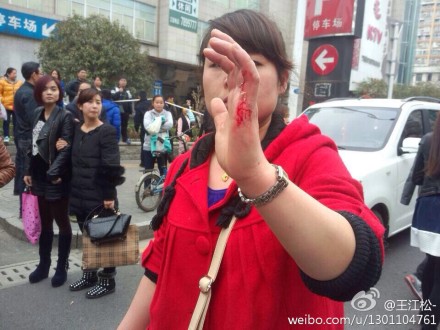 Violence also erupted at Walmart stores in Maanshan in Anhui has police removed protestors there. Two Walmart stores in that city are scheduled to close at the end of the month. In all, Walmart will have attempted to close down five stores across China just this month.Workers in Changde have vowed to continue their protest.

In Changde, the predominately women workers, many of whom were long-serving employees, were offered just two options: relocate to another Walmart store in China or accept what they considered to be a substandard severance package.

The workers complained that neither the two-week notice period nor the amount of compensation was in accordance with China’s labour laws. Importantly, however, it was the store’s trade union chairman Huang Xingguo who led the workers in their protest.

The trade union convened a meeting on 4 March during which employees stated their demands, discussed strategies, and set up a nine-member negotiation team comprised of seven trade union council members and two worker activists. They agreed during the meeting that no less than three team members must be present during negotiations with Walmart and that any kind of agreement must have no less than three member signatures.

Meanwhile, the union informed the municipal trade unions federation, local labour authorities, the police, and other relevant government bodies in writing of Walmart’s wrongdoings and the possible action workers might take.

Walmart management refused to discuss the workers’ grievances and simply posted the closure and staff settlement terms on the store noticeboard the next day. Tension increased further when management hired temporary workers to remove valuable merchandise from the store. Walmart, internationally known for its tough stance against workers’ rights, has reportedly closed down 13 stores in China over the last 15 months with little or no regard for the interests of its employees.

On 7 March, the store union demanded that the municipal trade union federation get involved, presenting the workers’ 14 demands and stating that the closure without prior notice and laying off large numbers of workers without negotiating with the trade union was a blatant violation of labour laws in China.

On 13 March, the city union responded in writing saying that it has been working vigorously with all concerned government bodies and would defend the workers’ rights to the best of its ability. However, little practical help was provided. The workers themselves were very disappointed in the lawyer provided by the city union.

The local government meanwhile seemed to side with Walmart. The director of the local commerce department reportedly even threatened to “call the police and make arrests” if the workers did not back down. On at least one occasion, Walmart management did call the police but no arrests were made at that time.

Huang Xingguo remained defiant and wrote an authorisation letter to the vice-chairman saying: “If I get arrested, you will carry on!” On the morning of 20 March, Huang was told to report to the local police station.

The stance of the store trade union in this case has won praise from labour activists in China. Professor Wang Jiangsong at the China Institute of Industrial Relations said: “It is extremely rare and heroic for a trade union chairman to stand up for workers’ rights. It is something that everyone should protect, cherish and learn from.”

CLB Director Han Dongfang noted that the increasing number of labour disputes in China was forcing trade union officials to take a stand, either for or against the workers. The union could no longer be a passive bystander, he said.

On 19 March, the store trade union had issued a formal request for collective bargaining with Walmart management.

After consulting lawyers, the union affirms that the closure of the store gravely affects the legal rights of employees.  Since Walmart failed to provide any written documentation to prove that it had consulted workers about this issue or solicited their opinions, its action is a blatant violation of Article Four of the Labour Contract Law. Based on the principle of equitable negotiation, the trade union now asks Walmart to initialise the bargaining process in a timely fashion, seek common ground, and solve the labour dispute as quickly as possible. The union hereby invites Walmart to take part in a bargaining meeting in the store cafeteria at 3:00 pm on 21 March 2014. The trade union suggests that both parties send five representatives to join the talks and that all others are welcome to sit in.

Walmart and the workers have so far reached an agreement on the following demands:
1. Facilitate the collection of unemployment benefits in accordance with the law.
2. Facilitate the collection of the workers’ Housing Fund.
3. Verification of contract termination, noting that the termination is due to store closure.
4. Payment of 2014 Lunar New Year benefits (170 yuan).
5. Payment of all insurance premiums and housing fund contributions that accrue prior to the month of contract termination.
6. Payment of store union membership fees that accrue prior to the month of contract termination.
7. Pay pregnant women and nursing mothers additional compensation in accordance with the law.
8. Pay 2013 bonuses in cash or include them in the lump sum severance package.
9. Because Walmart illegally terminated the employees’ contracts, it should pay for the annual holidays not yet taken by the workers.
10. Payment of a proportion of the 13th month’s salary based on the months of service in 2014.
11. Full payment of salary for all workers before contract termination.

However, the two parties have failed so far to agree on these outstanding demands:
1. Walmart to pay 2*(N+1) in compensation. “N” stands for the number of years of service.
2. Walmart to pay for the additional expenses caused by the illegal contract termination, such as children changing school, rent, etc.
3. Salaries to be calculated according to the outcome of the 2014 collective wage negotiations.