There have been at least 19 protests in the last three months alone over unpaid wages at construction projects run by China’s largest property developer, Wanda Commercial Properties, according to social media reports.

The company says it is currently developing 75 new additions to its portfolio of 125 Wanda Plazas, an integrated shopping, entertainment, hotel, office and apartment complex that has already become a distinctive landmark in many Chinese cities.

Although the protesting workers are not directly employed by Wanda, many have used the company’s iconic name to get attention for their wage demands.

On 3 November, workers at the Wanda Plaza in Guilin climbed to the roof and unfurled a banner while colleagues demonstrated in the streets below. Photographs of the protest on social media caused one netizen to remark “I never thought a big company like Wanda would fail to pay workers.” 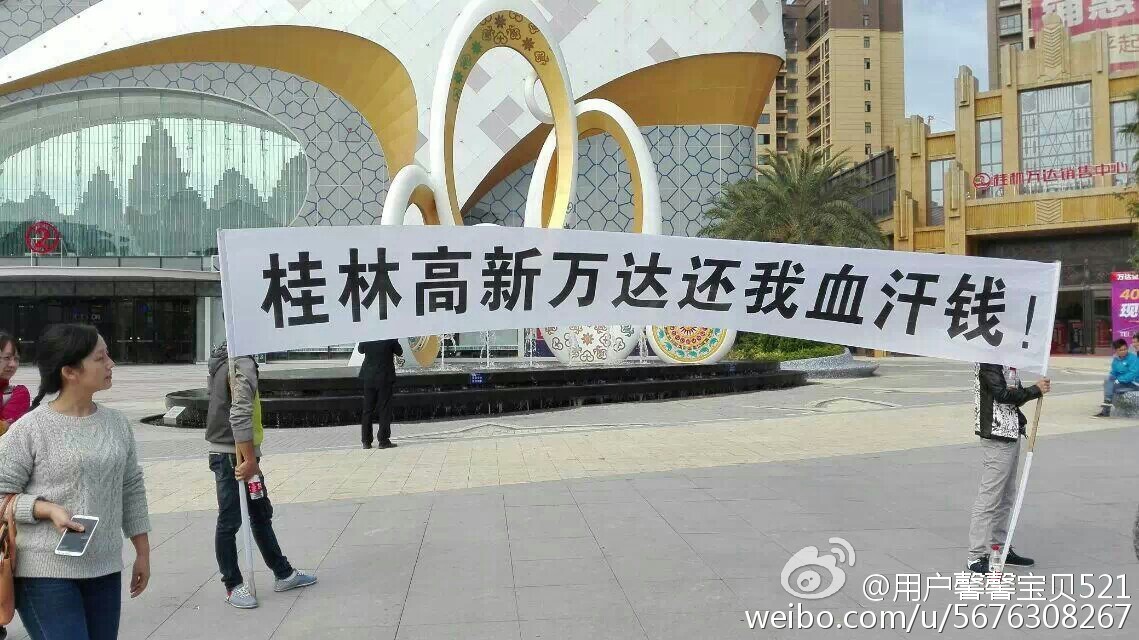 Wage arrears protest at Wanda Plaza in Guilin on 3 November 2015.

The previous day, construction workers at the Wanda Plaza construction site in Yinchuan, Ningxia, had staged a protest demanding payment of wage arrears from the China Construction Second Engineering Bureau and the Run’an labour service company, which had been contracted to build the plaza.

There were similar protests at Wanda Plaza construction projects in Ziyang, Sichuan on 1 November, in Quanzhou, Fujian, on 29 October, and Fuyang, Anhui, on 23 October.

The non-payment or delayed payment of wages has been an endemic problem in China’s construction industry for decades. Multiple layers of sub-contracting and the lack of formal employment contracts mean that construction workers are always the last to be paid whenever construction projects run into trouble.

In the first ten months of this year, CLB’s Strike Map recorded 653 wage arrears protests by construction workers, accounting for nearly one third of the total 1,974 strikes and protests across all industries.

The Wanda Plaza protests show that even the largest and most high-profile corporations in China cannot guarantee the payment of wages for construction workers.

Wanda Plazas were initially funded, built and owned by the Wanda group itself. Rents accrued from earlier developments were used to fund new developments. With the slowdown in the property market, Wanda Commercial Properties is reportedly relying more on external financing and its long-term partners such as the China Construction Group to develop the projects with Wanda managing the property when it is completed.

Wanda claims on its website that its 110,000 employees enjoy competitive salaries, training and opportunities for career advancement, as well as a wide-range of benefits. The official All-China Federation of Trade Unions seems to agree, naming Wanda Chairman Wang Jianlin as China’s Outstanding Employee-friendly Private Entrepreneur.

The construction workers building Wanda Plazas however are clearly not as fortunate as the company’s regular employees. The contrast in pay, working conditions and job security is emblematic of the growing divide between China’s low-paid workers and burgeoning middle class who consume the cheap goods and services provided by those poorly-paid workers.