When Yang Jinzhong, a 65-year-old sanitation worker in Chengcheng county, Shaanxi, was hit and killed by a motorcycle while at work sweeping the streets on 31 January, no one really paid any attention.

It was not until six weeks later, when the local newspaper Weinan Daily published the story that the tragedy came to light. The newspaper revealed that the Chengcheng Sanitation Bureau had refused to recognise the incident as a work-related injury and that the workers’ trade union representative had actually supported the decision.

The chair of the sanitation bureau trade union, Hui Xuejun, told the Weinan Daily that in his opinion, work-related injuries were caused by illness, not traffic accidents. He suggested that if anyone disagreed, they could go to arbitration.

Hui’s response was condemned as utter nonsense by one labour-relations expert, who said Hui obviously had no idea what the role of a trade union chair should be.

But Hui is not completely ignorant. He was at least aware of the fact that Yang did not have a proper employment contract with the bureau, neither was he insured. The newspaper reported that none of the 200 sanitation workers in Chengcheng county had signed employment contracts with the bureau. Moreover, their only protection from speeding traffic was a uniform with a few reflective strips attached to it.

Yang’s tragedy is not an isolated case however. Since last October, there have been at least ten incidents reported in the Chinese media in which sanitation workers have been killed after being hit by vehicles.  In perhaps the most serious case, five sanitation workers were hit by a car in the western city of Xining on 9 December 2014, leaving two dead and three injured.

And last year, the Kunming Daily reported that 347 sanitation workers had been injured in traffic accidents while at work in that city from January of 2013 to May of 2014, and that 26 of them had died. 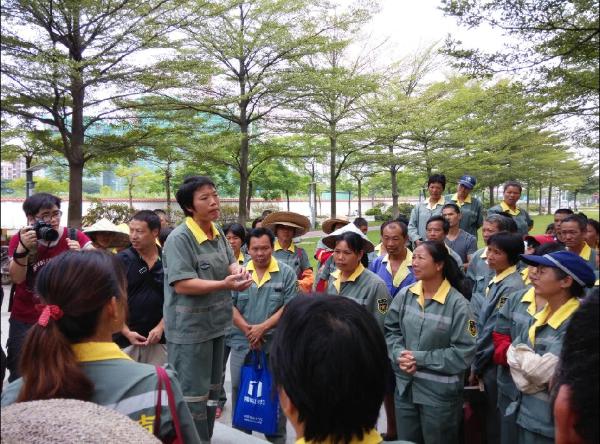 Although most sanitation workers in China are poorly paid and face numerous hazards at work, some workers, such as those in Guangzhou University Town, have proven that the status quo can be changed if workers are organised and can engage their employer and the local government in collective bargaining.