A thorn in the side of Walmart: Wang Shishu goes to court again

Three years to the day after he was first sacked by Walmart for organizing workers to take a stand against low wages and an ineffective trade union, labour activist Wang Shishu was back in arbitration court in Shenzhen last Friday 24 July demanding reinstatement for a second time after being sacked yet again in May this year.

When he was sacked for the first time in 2012, Wang engaged in a highly publicized legal battle with Walmart and finally got his old job back on 23 April 2014. Once reinstated, Wang continued to organize workers and demand proper trade union representation at the store.

In early May this year, Wang circulated an open letter to his Walmart co-workers entitled Support Walmart’s Value of Integrity, Oppose Yellow Unions. The letter referred to a recent company campaign to make “integrity” one of its core values. Wang seized the opportunity to criticize the collective wage agreement negotiated by the Shenzhen district trade union, which, he argued, had resulted in a smaller wage increase than expected.

Wang called for the dismissal of two union representatives followed by direct, democratic elections to ensure that the union did a better job in representing store employees in the future. He was dismissed soon afterwards. 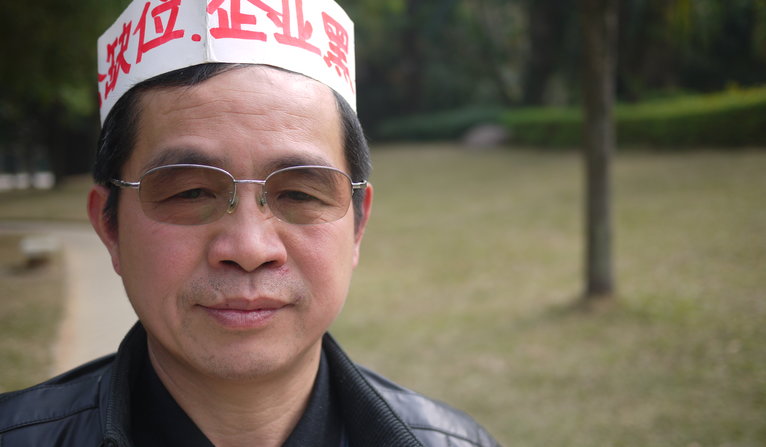 Wang Shishu during his first fight for reinstatement. Photograph by Rob Schmitz. Marketplace

Wang’s lawyer, Duan Yi, the director of the Laowei Law Firm in Shenzhen, pointed out that Wang’s predicament was illustrative of a long-standing problem at Walmart in China, where the trade union hardly ever stands up for its members and the company can fire workers it sees as trouble-makers with virtual impunity.

In the close to a decade since Walmart’s stores in China were first unionized, there has just been one prominent example of a trade union chair actively supporting workers in a dispute against management; in March 2014, when union representative Huang Xingguo organized 143 employees to oppose the closure of the Walmart store in Changde, Hunan.

Speaking at a seminar on Walmart in Washington DC last month, Duan pointed out that Wang Shishu was just one of many activists who had been dismissed over the years. In fact, Duan said, his law firm had taken on about 100 cases against Walmart, 80 of which were specifically related to the firing of worker activists like Wang.

Duan said that while Laowei had been successful in getting some sacked workers their job back, legal action was not in and of itself a long-term solution. During the seminar entitled Organizing the Workers of Walmart: From Bentonville to Beijing, Duan noted that Walmart workers in China had now developed their own online support network, the Walmart Worker Friendship Association, that connected more than 1,000 workers all over China.

It is this kind of collective action and mutual support that Duan believes will ultimately be more successful in improving the pay and conditions of Walmart staff.