Around 1,000 teachers from Wuyang county in rural Henan have been on strike since 8 April in a dispute over low pay and wage arrears.

And they were joined by another 1,000 teachers from the neighbouring county of Linying in a mass protest on 15 April. Holding out banners that read “Equal pay for equal work,” the teachers marched through the streets of the main city Luohe for several hours complaining they were paid less than half the salary of their counterparts in the city. 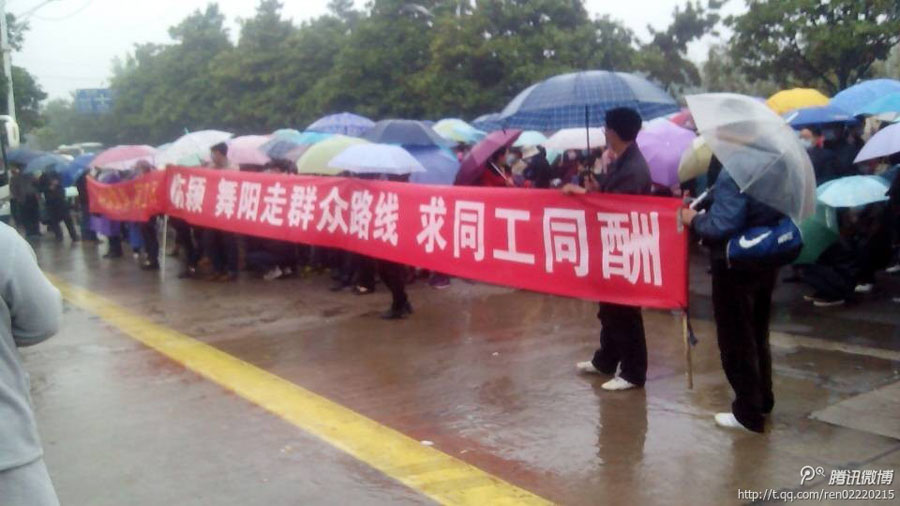 The teachers said that many of them earned less than 2,000 yuan a month, while the government claims it pays them 4,000 yuan per month. Moreover, the teachers claimed that the Wuyang county government owed them on average 5,600 yuan in arrears.

“The government could be telling the truth about pay levels but they always play the same trick to cut wages,” said Mr Li who is employed by a county high school in Guangdong and is familiar with the issue. “Local governments in rural areas often take a very big chunk of teachers’ original salary and redistribute it under the so-called ‘performance-related pay’ scheme.”

“Only a very few teachers are properly rewarded for their extra effort and they usually have good relations with the leaders at each school. Most rural teachers resent the scheme,” Li said. “Teachers in the cities are better paid and the performance-related pay usually accounts for a much smaller proportion of their monthly total.”

Teachers pay in China is determined by the central, provincial, and local governments, as well as school leaders. The teachers and their trade union have little or no say in pay and conditions.

As one Guangzhou teacher noted in CLB’s latest research report, the teachers’ trade union is largely ineffective and rarely does anything for the teachers: “We have a school trade union but it only organizes trips or sends us groceries such as ginger and toilet paper before the holidays. We are union members but we don’t attend union conferences and have no idea who our representatives are,” she said.

As a result, teachers have little option but to go on strike when they want to get their grievances heard. CLB has recorded a total of 46 strikes and protests by teachers across the whole of China over the last 12 months.