Despite recent increases in the minimum wage, the nearly 100 million young migrants who drive China’s factories are still earning around half the income of urban residents, according to an extensive survey by the All-China Federation of Trade Unions.

The survey of 1,000 enterprises, published on 21 February, found that migrant workers under 30 years of age earned 1,748 yuan per month on average, compared with the 3,047 yuan per month earned by urban residents.

Of those workers who had been involved in labour disputes last year, one third said low pay was by far the most important factor. And several interviews (around five percent) said they were not even being paid the minimum wage. 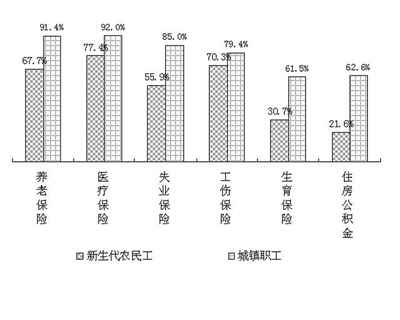 Work safety remains a major problem, the report found, with around one third of young workers having to endure extreme temperatures and noise. Some 36 percent said mechanical problems often led to injuries at work, and 35 percent worked in a high dust environment. However, 21 percent of respondents had not received any safety training, and only 52 percent had been given a health check up in the last year.

Moreover, nearly two thirds of the young migrant workers surveyed said they had not received any kind of job training since taking up their position.

The number of young migrants joining a trade union was considerably lower than that of older migrant workers, suggesting that the official trade union is struggling to reach the new generation of migrants. Nearly half the younger workers interviewed (48 percent) said they were not members of a union, while 56 percent of the older workers were union members. Around six percent of both groups were not sure if they were in a union or not.

The results of the survey confirm that nearly all of the problems that have traditionally affected migrant workers, low pay, long hours and poor working conditions remain unresolved. Indeed, for young migrant workers with higher expectations than their parents, life may even be worse.