Workers in at least three breweries in eastern China owned by Suntory Holdings went on strike last week after the company announced it was pulling out of its loss-making joint-venture with China’s best-known brewery Tsingtao.

Concerned about their job security, employees in Shanghai, Kunshan and Lianyungang staged a series of protests which eventually forced their trade union representatives to take a stand and side with the workers.

In Kunshan, workers blocked the factory gate holding signs stating “we want an explanation; we want to defend our rights”. One worker protested “after more than ten years of service, they just sell the factory when they please.” See photo below. 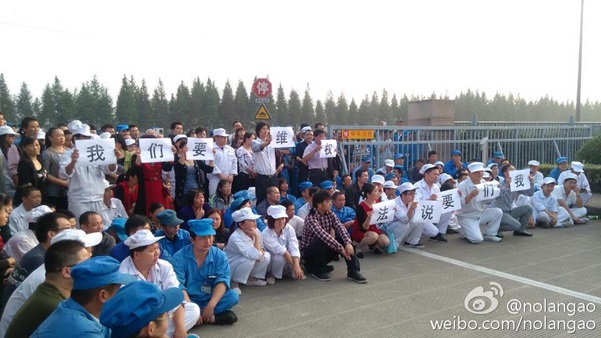 At the Shanghai plant, the enterprise union filed an official complaint with the company, asking for clarification of the compensation package being offered to employees. Suntory responded that it was simply selling its shares to its joint-venture partner and that employment conditions would remain unchanged and, as such, there was no need to offer any compensation for contract termination.

The disgruntled workers gathered in the cafeteria to discuss the company’s reply. One man climbed on to a table to denounce the company offer and announced the start of a campaign of resistance. The other workers responded with applause and shouts of approval.

The Shanghai workers were quickly joined by colleagues in Lianyungang who posted a photograph of them demonstrating solidarity with and support for their fellow workers in Shanghai. See photo below. 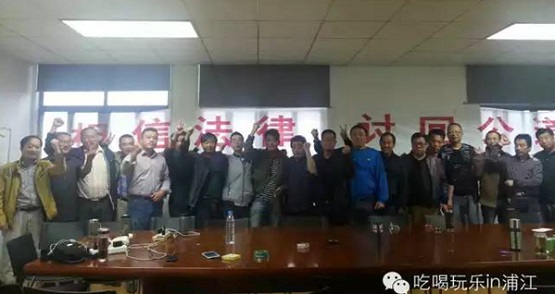 Workers said the union response at Kunshan and Lianyungang had also been supportive of workers’ demands but was more timid, choosing methods other than joining the strike. The two breweries have now resumed work without a clear response from the company.

The Suntory union response, while limited, at least was on the side of the workers and may encourage other unions in the industry to adopt a more pro-worker stance in the future. However, the failure of the union to foresee or preempt the Suntory sell-off clearly demonstrates just how weak and ineffective the vast majority of enterprise unions in China are.