Strikes and protests by transport workers in China, primarily taxi and bus drivers, are on the rise as incomes fall and pressure from management increases. In the first four months of this year, CLB recorded 69 transport strikes on our Strike Map, a 28 percent increase compared with the same period in 2013.

As noted in CLB’s latest research report on the workers’ movement, transport workers routinely complain of low wages, excessive working hours, exploitative managements and competition from unlicensed counterparts. And these problems are only getting worse. Two recent strikes by taxi and bus drivers in Guangdong, which involved around 3,000 workers in total, illustrate both the long-standing grievances held by transport workers and the lack of any effective channels to resolve them.

More than 1,000 taxi drivers in Dongguan went on strike on 18 April in protest at a drastic reduction in income following the city’s high-profile crackdown on the sex industry. Commissions from hotels, massage parlours etc. used to make up a significant proportion of taxi drivers’ income in Dongguan.

“It is hard to face my family when I only bring home less than half of what I used to earn,” said Mr Li a veteran taxi driver and father of two. “In the past I could make 9,000 to 10,000 yuan profit in a good month, but now with all the sex workers and their customers gone, I can only make a little over 3,000 yuan.”

Drivers in downtown Dongguan have to pay a monthly cab rental of 10,900 yuan to the taxi companies, while those in the suburbs pay up to 9,000 yuan per month. This was not a problem for drivers before the crackdown but now it has become a pressing issue, as Li explained:

Drivers don’t have a say in how much the taxi companies charge us. As long as they are making a profit, the companies don’t give a rat’s ass about whether situation has changed or not for us drivers. 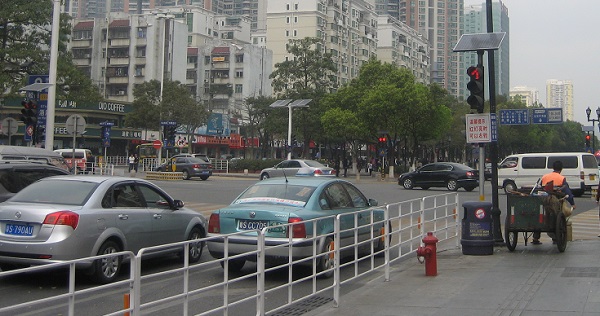 Stuck at a red light. Taxis in Dongguan.

The lack of an effective voice for the drivers in their wage levels and working conditions was also a key factor in the Shenzhen bus strike that occurred the day after the Dongguan taxi strike. Around 2,000 bus company employees, frustrated at long-standing management abuses, demanded a more transparent wage calculation system, overtime payments in arrears, fewer working days, and the abolition of a penalty scheme that forced drivers to pay for any vehicle damage.

Encouragingly, the official media in China is now recognizing the need for the more effective representation of transport workers as well as the creation of a collective bargaining mechanism to resolve disputes. An article in the Peninsular Metropolis Daily, later reprinted on the People’s Daily’s website, argued that making transport workers the “main body of industry trade unions,” would give workers the “right to speak” in negotiations with management.

The report also suggested that the government should take a neutral stance during labour disputes and beef up its efforts in monitoring and mediating labour relations on a regular basis, instead of acting as a fire-fighter every time discontent reached boiling point.