More than 2,500 workers at Lide Shoes took strategically-timed strike action in December that succeeded in bringing management to the negotiating table and led to an agreement on the payment of social insurance and housing fund contributions, overtime and annual leave payments as well as high-temperature subsidies.

After two strikes and three rounds of bargaining, Taiwanese-owned Lide agreed on 17 December to pay social insurance contributions dating back to 1995 and to a one-off compensation package of between 2,000 yuan and 12,000 yuan, depending on employees’ years of service. The company was also forced to disclose any future relocation plans and continue the dialogue with the workers’ representatives. Management further agreed in writing that it would not retaliate against those representatives.

The industrial action has now ended and the employees have returned to work. 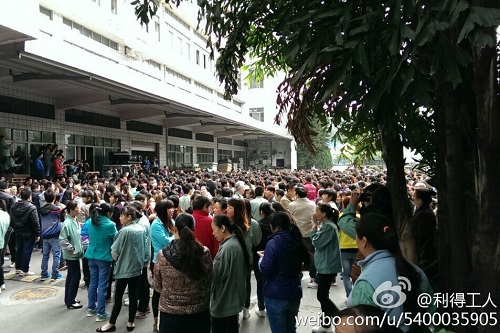 The dispute dated back to the spring of 2014 when workers at Lide first noticed that the factory was shifting production elsewhere, cutting back on overtime, and trying to persuade them to resign. After consulting with the nearby labour rights group, the Panyu Workers’ Centre, the workers gradually got organized and democratically elected 61 representatives and 13 chief negotiators who would represent all sections of the factory.

There was a trade union in place at the factory but it was largely ineffectual so the workers decided to take action by themselves. On their regularly-updated social media site, the workers said they were very confident of the solidarity they had built up and of their representatives’ ability to bargain on their behalf.

The labour activist and Panyu staff member, Meng Han, who advised the workers, said that the precise timing of the two strikes had been crucial to the success of the campaign: “The workers understand the production process the best. For example, when the factory has to produce at full-speed, this gives them a vantage point.”

The Lide shoe factory is just one of several workplaces in Guangzhou where workers have successfully organized and forced management - through strike action - to engage in collective bargaining. It will be interesting to see if workers choose to use the new Regulation, which seeks to codify collective bargaining procedures, to achieve the same goal or if they will stick to existing practice.