The Shenzhen authorities have now investigated last month’s media exposé of child labour in the city and have made their determination. However, the punishment handed down to the two factories involved is unlikely to scare off other employers in the future.

The investigators said they could only confirm for sure that nine of the more than 70 workers were under 16 years-of age, and so, based on the Regulations on the prevention of the use of child labour, which stipulates a maximum fine of 5,000 yuan for each incidence of child labour, the two factories were fined 35,000 yuan and 10,000 yuan respectively.

Investigators said that 44 of the workers had already reached the minimum legal working age of 16 but that the ages of another 20 workers remained unclear.

One could argue that the officials’ hands were tied in that they could only fine the employer for cases of child labour that they could legally prove, but their whole approach was so narrowly bureaucratic, so by-the-book, that they completely ignored the wider problem and failed to come up with any measures to safeguard the children’s rights and prevent more young workers from being trafficked to Shenzhen in the future.

The prime concern of the investigators was simply to establish if any workers were underage and if so arrange for them to be sent back home as quickly as possible, thereby absolving themselves of any future responsibility – until of course the children returned.

The Southern Weekend newspaper summed up the approach perfectly in a cartoon (below) which showed the authorities punching the problem of child labour away only to have it bounce right back. 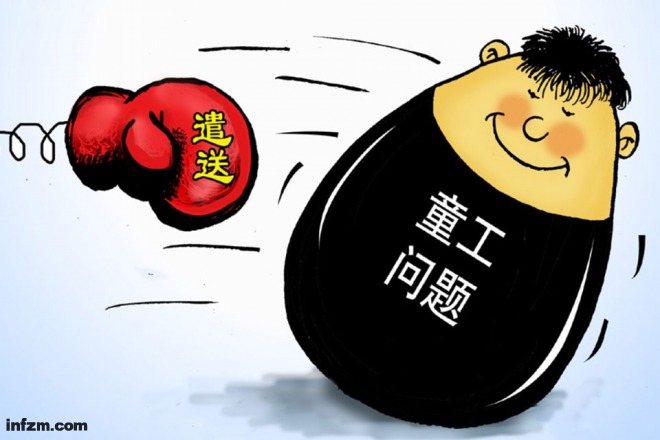 As CLB recommended in our 2008 research report on child labour, it is crucial that the labour authorities in districts known to have a child labour problem become much more proactive and ensure that factories are inspected as a matter of course rather than just when the media exposes something that was right under their nose.

Another option was suggested by Mickey Long who commented on my previous blog on this case. He argued that China should:

Allow competing businesses and the labour union to sue those who hire children. Give the honest business 50% of the recovery, 50% goes to the government. In the US and England it's called Qui Tam actions or private attorneys general actions. This reduces burdens on government enforcement costs and creates a huge number of enforcers. Watch how many change their ways quickly, at little cost to the government and great benefits to honest businesses.

In China, only an injured party can file a civil lawsuit and it will probably be very difficult for a business to convince a court that it is indeed an injured party but it would certainly be interesting to see what happens in a test case.

The trade union cannot sue but it clearly does have a duty to protect the rights and interests of employees and that includes ensuring that employers do not use underage workers. However, when it comes to child labour and workers’ rights in general, trade unions in China have largely been asleep on the job.