Workers at a Shenzhen electronics factory have forced their employer to pay lay-off compensation in advance as a safeguard against potential factory relocation plans.

The one hundred or so employees at Guang Xie Electronics were aided in their campaign of collective action, first by a civil society labour organization, the Chunfeng Labour Dispute Service Centre, and latterly by the district trade union federation.

The surprising intervention of the district union was a key factor in the dispute, according to the director of Chunfeng, Zhang Zhiru:

The success of Guang Xie shows us once again that worker solidarity is invincible. The active involvement of the official union, and them taking the workers’ side, was the highlight of this case. Workers regaining trust in the official union is something that not only the workers hope for but also what many other social groups, including labour organizations, hope for.

The dispute began on 23 May when workers went on strike and picketed the factory gate in order to prevent management from removing machinery and other valuable assets to the neighbouring city of Huizhou.

Officials from the local labour authority arrived at the factory on the same day and tried to mediate in the dispute but, as the worker’s social media account shows, they only made matters worse by arguing with angry workers inside the factory. 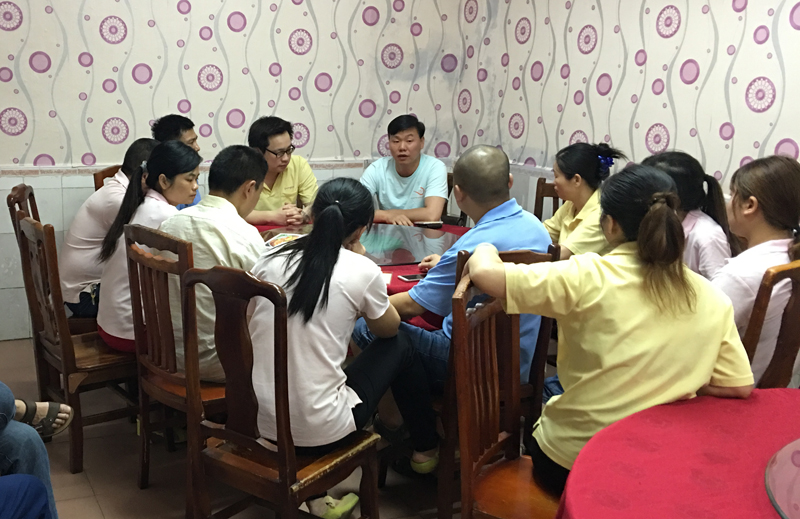 In the following days, the Chunfeng Centre organized two trainings for the workers on how to engage in collective bargaining with management. The workers elected 15 representatives, formed a workers’ committee, and invited management to the negotiating table to talk about factory trade union reform, wage increases, long-service compensation and social insurance and housing fund contributions in arrears.

After several rounds of negotiations, the factory put out an announcement on 30 May which said that it would not relocate and would begin to calculate the social insurance and housing fund payments. But, at the same time, it also threatened to dismiss the strikers if they did not return to work within in three days. The workers refused to be intimidated and continued the strike.

The worker’s determination finally caught the attention of the Longhua district trade union which, according to Zhang Zhiru’s personal blog, intervened and helped the workers negotiate with management. On 1 June, management agreed to provide all workers with a lump-sum compensation package based on each worker’s length of service at the factory.

The demand by workers for compensation in advance of a factory closure or re-location is becoming increasingly common in the Pearl River Delta as the region’s manufacturing industry continues to decline. Workers have learned from bitter experience that if they don’t get lay-off compensation in advance, the chances of getting anything at all after the factory closes its doors are slim to zero.