A sharp increase in the number of wage arrears cases saw the total number of collective worker protests recorded by China Labour Bulletin reach 49 in October, the highest monthly total since CLB launched the strike map in January 2011. 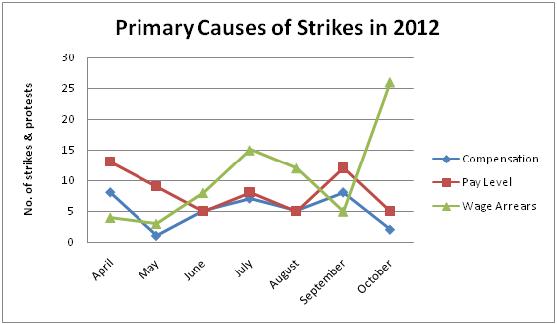 There were 26 wage arrears in all,* highly unusual for this time of year. Wage arrears cases, particularly in the construction sector, normally peak at the end of the year when migrant workers demand payment.

However, a Financial Times analysis revealed that Chinese listed companies have reported a sharp increase in unpaid bills in the third quarter, and the hardest hit companies in terms of accounts receivable are those linked to the construction and infrastructure sectors, which may explain why construction workers were having a hard time getting paid. The multiple layers of sub-contracting in China’s construction sector means that migrant workers are always the last to get paid.

The health of the manufacturing sector showed some signs of improvement in October however with the Official PMI reaching 50.2 and the HSBC PMI data standing at 49.5, both figures up from September. There were 14 strikes recorded in the manufacturing sector involving wage arrears, low salaries, poor catering standards management misdeeds, and overtime pay during the National Day Holidays.

In particular, workers at Singapore’s Flextronics International in Shenzhen and Hong Kong’s Win Hanverky, a sportswear manufacturer for Adidas, in Guangdong protested management decisions not to pay workers compensation after a company takeover, while workers at former state-owned fridge maker protested the alleged inability of management to make the company profitable after Singapore-owned New-fly bought a 90 percent stake in the company. 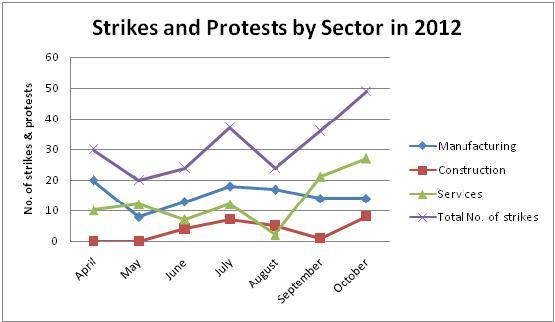 In the 16 cases where it was possible to determine business ownership, six were in Hong Kong or Taiwan-owned companies, five were in privately-owned businesses and two took place in state-owned enterprises.

Nearly all the strikes covered in the mainstream Chinese media featured some kind of intervention by the local government. However, as workers from Baojia Garments, a subsidiary of Hong Kong’s Win Hanverky, told CLB, the local labour bureau was not very effective in securing their demands for compensation.

The local authorities in Shenzhen, by contrast, were quite proactive and helpful during the Zhang family dispute featured by CLB at the end of October. When the family held a banner in front of the labour arbitration court protesting Foxconn’s alleged unethical conduct and the arbitrator’s ad hoc cancelation of the hearing, police, and officials from the social stability maintenance department and labour department quickly held a joint meeting to address their complaints. The authorities then agreed to reimburse the family’s lawyer’s flight tickets and ordered the arbitration to be held one week later.

Shenzhen has extensive experience in dealing with labour disputes and often takes a more conciliatory approach than other cities. It is currently in the process of replacing old manufacturing businesses with new value-added and high-tech companies.

Note: Most of the wage arrears cases this month came from a particular Sina Weibo user who aggregates other users’ photographs of protesting workers on an hourly basis. The photos were taken by onlookers who witnessed collective actions in various locations across China. Workers in those photos were, for example, seen on top of a building threatening to jump off, blocking the road, or marching on the road while holding banners demanding the payment. However, for many of those cases, we found it difficult to identify the names of employers or even to identify the workers’ specific complaints.