Sack them for Striking. Arrest them for Protesting. Imprison them for Organising – Chinese Workers Are Not Going to Give Up

Multinational companies with interests in China are facing a challenge: labour unrest.

While academics debate whether there is or isn’t a labour movement in China, human resource managers and CEOs on the ground are facing the reality of an angry workforce aware of its rights and conscious of its interests.

Take Walmart for example. Since 2014, Wal-Mart ‘associates’ – workers to the rest of us – have built social media platforms through which workers share information and support resistance to the corporation’s introduction of flexible working hours. The ‘comprehensive working hours system’ does not just reduce overtime pay. It makes it hard for workers to plan family life or take the second jobs often required to meet basic living costs. In early July this year, strikes broke out across four stores. Blogs posted by workers and read by tens of thousands of Walmart employees tell of store managers using the new work roster to target activists, especially those who refuse to sign up to the new system. The arrogance and at times bullying behaviour displayed by store managers belies Walmart’s service values such as ‘Act with Integrity’ and ‘Respect for the Individual’.

In the southern province of Guangdong, Chinese workers are furious at factory sell-offs with the potential to impinge negatively on pension rights and seniority. In November, workers at a Danone water-bottling plant organized a week-long strike after learning that the factory had been sold off without anyone informing them. They demanded proper severance arrangements be put in place for those wishing to leave due to uncertainties over pension rights and social insurance arrears. In the same month, Sony ran into similar problems following the sale of its camera plant in Guangzhou that came as a total shock to its 4,000 plus workers. On 10 November, workers organised a strike and picket lines that brought the plant’s assembly lines to a halt and blocked goods from coming in and out of the plant just as the Christmas busy season was getting into gear. Perhaps for this reason, there were indications that Sony has met most of the workers’ demands – but were reportedly going after strike organizers.

Of course, multinational companies acquire and sell factories all the time. That’s how capitalism works. However, in China deals are signed off without their employees finding out until months later. As these highly organised, coordinated and social-media connected strikes suggest, we are entering a new era in which workers are demanding a place at the negotiating table. At present there is no effective channel through which workers can negotiate their share of the pie with employers. In its absence, local governments deploy riot police and make arrests, repressing strikes but failing to address the cause. It is a violent and expensive response and it doesn’t work: strikes continue to be a regular feature of China’s labour relations. 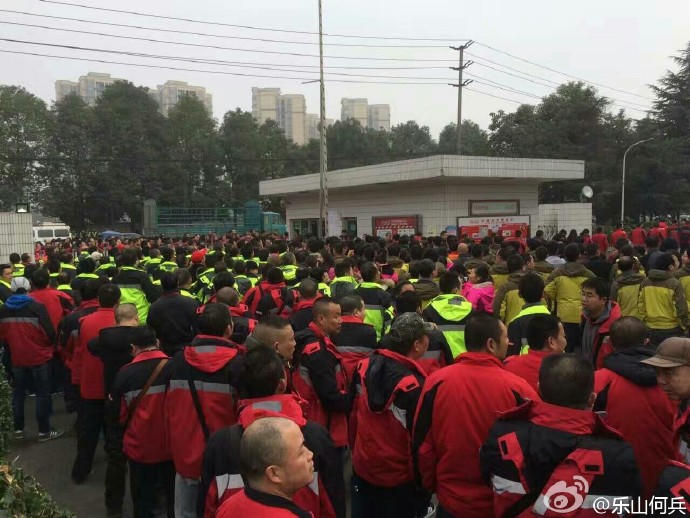 As we have argued at China Labour Bulletin, there is an effective alternative for workers, employers and the state to the strikes and protests: collective bargaining. Why?

First, repression no longer works as in the past. It was certainly effective in the early days of unregulated capitalism when China opened up its coastal zones to foreign investment in 1980s. It worked too during the privatisation of large numbers of state-owned enterprises in the late nineties when up to 35 million workers lost their jobs. But it won’t work today. Workers know their rights and know what is due to them.

Second, millions of China’s workers are now able to spread information via social media bypassing the state’s firewalls and official media channels. The information genie is out of the bottle giving workers access to knowledge hitherto denied them. And as the old cliché goes, knowledge is power. Information reduces isolation and the fear that comes with it. Workers can see that they are not alone and there are others facing similar struggles whether it be over flexible working hours, secret sell-offs or wage arrears. Information also increases leverage. Workers in the Danone strike had access to data on a previous dispute over a sell-off by Pepsi-Cola in which workers’ demands were mostly met.

Third, and most important with regard to collective bargaining, is the issue of workers’ representation. In China there is only one legal trade union, the All-China Federation of Trade Unions (ACFTU) led by the Chinese Communist Party and controlled by employers in most workplaces. Although there are rare occasions when it has acted on behalf of workers, this is almost always under pressure from strikes and protests.

Indeed, Chinese workers are like workers anywhere. They need to have the opportunity to elect representatives and present their grievances to management via a legally-defined process of negotiation otherwise known as collective bargaining. The inability of the ACFTU to carry out this core trade union task means that workers have no option but to go on strike, taking us back to repression.

The pressure on the ACFTU is not just coming from workers. In 2015, China’s ‘core leader’ Xi Jinping ordered the ACFTU to come up with a plan to improve workplace representation. Xi’s anti-corruption drive won him considerable support among China’s workers. But he cannot afford to sacrifice it, particularly in the run-up to this year’s 19th Party Congress where the legitimacy of his leadership and of the Party’s rule will be subject to domestic and international scrutiny. Thus his instruction to the union to up its game and ensure workers needs are met is aimed at shoring up legitimacy. To date, no plan has been forthcoming – at least not in public. But the longer the ACFTU procrastinates, the higher the stakes for everyone, including the multinationals and their supply chains.

Labour unrest in China is not going to go away. Beginning 21 November, striking Coca-Cola workers in three cities thousands of miles apart – Chengdu, Chongqing and Jilin – called for effective trade union involvement in talks with management over plant sell-offs. Their demands have clearly been coordinated and the dispute escalated amid reports of police violence in Chongqing.

Faced with this pressure from below, it is my firm conviction that the question is no longer if the Party will introduce some form of collective bargaining, but when. It will do so in order to ensure its own survival and my advice to domestic and international employers alike is to be ready for it.