Three tired but contented worker representatives sat around a table at the Panyu Workers’ Service Centre in southern Guangzhou and chatted about a well-deserved holiday. They wanted to spend more time with their families and maybe go back to the countryside to visit their parents.

After a four-month-long fight, Liu Fen, Guan Dongwei and Song Weiguo, together with nearly one hundred co-workers at the Liansheng moulding factory, had finally got what they wanted.

On 10 October, the workers had signed a collective agreement that forced the company to do something it had steadfastly refused to for the last two decades – pay workers the severance pay they were entitled to.

The three workers had been chosen by their co-workers to represent them in talks with management partly because of their experience and seniority - all of them were master moulding operators with more than ten years of experience. Guan himself was an 18-year-veteran from the neighbouring province of Guangxi.

Guan said the workers knew it would be a tough fight. In the past, he explained, the workers had a decent wage and benefits and as such many chose to settle down in the area around the factory. However, Liansheng was badly affected by the global economic crisis of 2008. Orders shrank, and the company gradually scrapped fringe benefits such as holiday bonuses and company excursions.

Giving with one hand and taking with the other

Then in the summer of 2013, the Guangzhou municipal government announced an increase in the local minimum wage to 1,550 yuan a month, effective 31 May. Although the company did increase the basic wage in line with statutory requirements, it also clawed back revenue by reducing hourly subsidies and slashing overtime for its own employees and transferring work to contractors.

Ordinary workers, who had relied on nightshift and weekend overtime to get by, found it harder to make ends meet. In early June, the workers got together and chose six representatives to push their demands for higher pay. Initial talks with management on 13 June failed to win any concessions so on 28 June, more than 300 workers went out on strike. The local labour authority intervened and brought the company to the negotiating table. On 3 July the company signed a collective wage agreement that prohibited the reduction of subsidies to offset increases in basic pay, and ensure that workers’ actual pay increased in line with the minimum wage.

Meanwhile, nearly 100 workers continued to demand that the company address the wider issues of equal pay for equal work and the discriminatory practice of only giving lucrative overtime allocations to those employees who had a good relationship with management. The workers democratically elected 15 representatives, five of who were authorised to hold collective bargaining talks with management.

The worker representatives tried repeatedly to get the company, local labour authority and the Guangzhou Federation of Trade Unions to engage in multi-party talks. However, the company refused to negotiate and the local government refused to accept the legitimacy of the workers’ elected representatives. Instead the authorities tried to persuade the workers to resolve their grievances through the time-consuming labour arbitration process.

The workers then went to the nearby Panyu Centre to discuss their options. They decided to make as much noise as possible without giving the police any excuse to detain them for disrupting public order. Holding banners and blowing whistles, they staged a march through the workshops within the factory compound, exhorting their colleagues to join the fight. One worker described in her diary how:

We surrounded the managing director’s car when she ordered the driver to start the engine, trying to scare us off. She didn’t realise that we were resolute and determined to defend our rights. We sat in front of the car; some of us even lay next to the wheels.

We bought 30 whistles and blew them as we marched, what a noise we made! The control shop almost halted production and the director called the police. The police did come but did nothing to us. 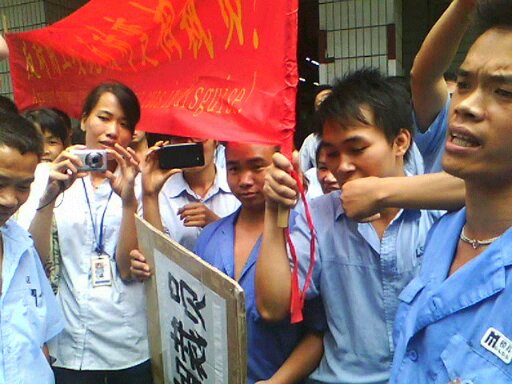 Liansheng workers on the move

In addition, the workers posted reports on their activities on social media and shared real-time information with each other on instant messaging platforms. They also worked closely with the the Panyu Centre, which was instrumental in getting the workers avoid conflict with the police. When petitioning the local government, the centre suggested that workers eschewed public protest, marches, banners and the chanting of slogans, and instead simply took public transport to visit government offices. Under these circumstances, it was hoped the police would have no excuse arrest the workers.

As a result of the workers low-key approach, some in the government apparently resorted to bribery. Song Weiguo described the offer he was made by a “thug” who “just happened” to drive a car with government license plates. He told Song:

Think about it, your wife and kids are still here. If you quit, we will give you 200,000 yuan right away!

However, the workers turned down all attempted bribes and refused to be intimidated by threats. After more than two months of struggle, the local government finally knocked on the workers’ door and said they would help to resolve their grievances as soon as possible.

Under pressure from the local government as well as the workers, the company finally signed a collective agreement that ensured that departing workers got an acceptable severance package. It was not an absolute victory, most workers got 90 percent of what they were legally entitled to but, as Guan Dongwei said it was still a victory given the company’s past practice of giving workers absolutely nothing.

It is true that some of us made compromises and did not get everything the law says we should get. But it is still a collective victory.

During a celebration dinner in late October, all the Liansheng worker representatives went up to the stage and shared their experiences, and the Panyu Centre showed a short film documenting the workers’ struggle, which brought many in the audience to tears. The workers’ chief representative Lin Ye told the audience:

We slapped the boss in the face: he used say that he will ‘fix’ us no matter how high price might be, but now he pays us severance packages for the first time in his life!  We also slapped the government in the face: it used to reject our right to represent the workers, and now it pressures the company to sign this agreement with us on equal grounds.

And labour rights lawyer, Duan Yi, publicly praised the solidarity of the Liansheng workers on his micro-blog, saying they had been fighting for their rights and their dignity. He wrote:

Hold the banner high and march with pride. Stand tall and tell the world that solidarity of the workers is, and has always been, invincible!

CLB Director Han Dongfang stressed that although the gains made by the workers were relatively modest, their determination to stand up to an arrogant and uncompromising boss was impressive. Moreover, the solidarity and cooperation between the workers and the Panyu Centre was exemplary:

In the current situation where trade unions cannot perform the role they are supposed to, labour rights groups can provide workers with the necessary guidance. They can help rationalise the current ad hoc model of striking workers taking to the streets, and give impetus to the establishment of a collective bargaining system in China.