Workers at several Pepsi factories across China went on strike 5 March 2014 in a protest against management’s plans for large-scale layoffs, pay cuts, and reduced benefits. Workers displayed banners around the factories stating “No to illegal layoffs! We demand jobs! We need to live! We have a family to feed!” 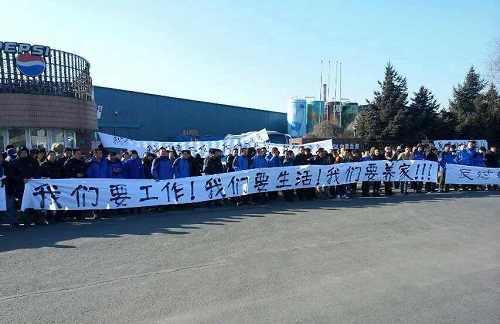 In an unusual development, the strikes in Changchun, Chongqing, Xinjiang, Harbin, Xi’an, Lanzhou, and other areas were supported by the company trade union. The Pepsi company union convened a special meeting to gather workers’ grievances and stated in a public letter that it not only reserved the right to “have workers’ demands answered” but would seek help and support from higher-level trade unions and the government bodies involved.

In addition, enterprise trade unions at individual Pepsi factories took their own specific actions. In the northern city of Changchun, for example, the factory union sent a list of workers’ demands to the local government, city-level trade union, and Pepsi’s senior management, stating that it was illegal for Pepsi to unilaterally terminate workers employment contracts, and that the union will never agree to such company “decisions.” The Changchun union also proposed a compensation plan that better protects the rights of younger worker with fewer years’ employment at the factory.

This week’s protests follow similar multi-factory protests at the end of 2011, when Pepsi offloaded its China bottling business to the Taiwan and Japan-owned Tingyi Holdings. Several thousand workers in at least five factories went on strike at the time in a coordinated protest to protect their jobs and demand assurances that pay, benefits and working conditions would not be eroded as a result of the takeover – concerns that now appear to have been valid.