Nurses in at least eight hospitals across China have gone out on strike in the last six months over low pay and benefits and demands for equal pay for equal work.

Most recently, several dozen nurses in Chongqing walked off the job on 19 January demanding pay increases. This followed a strike involving more than 100 nurses in Huaibei, Anhui, on 8 January, demanding a pay increase and equal employment status (see photo below). 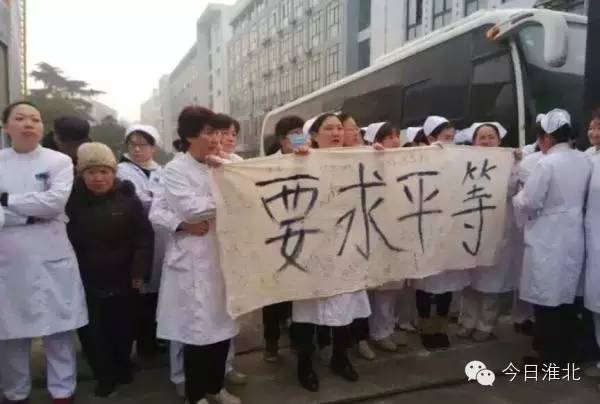 The central province of Anhui has been the epicentre of the nurses’ strike action in China, with at least three protests in the last six months including a high-profile protest the Fuyang People’s Hospital on 28 August 2015, which focused on reduced bonuses and demands for better working conditions and equal pay for equal work.

A key issue in the Fuyang strike, and for nurses in nearly all of China’s public hospitals, is the often very wide gap in pay and conditions between formal staff and contract workers. As an article published on CN-healthcare.com (健康界) in September noted, hospital managers resort to no end of “dirty tricks” to prevent nurses and other healthcare workers from gaining formal employment status, something which should entitle them to the same benefits as civil servants.

The low pay and unfair work practices at China’s public hospitals mean that administrators can often rely on nursing staff quitting before they can obtain formal employment status, and then replacing them with young, inexperienced staff on short-term contracts, a device the article referred to as the hospitals’ “population dividend.”

These recent strikes follow a series of protests by hospital workers in 2013 and 2014 over violent attacks on doctors, nurses and other healthcare professionals. The publicity given to these sometimes fatal attacks prompted the government to issue new guidelines criminalizing a wide-range of physical and verbal acts directed against medical staff. There is little evidence however that safety for medical staff has improved significantly as a result.

One of the most pressing problems for nurses and other healthcare workers in China is the lack of a professional trade union that can address the issue of workplace violence, low pay and job security and represent employees in talks with management over better pay and conditions.

There are hospital trade unions in China but their primary function is to act as a bridge between the Communist Party and the staff and help hospital management “create a fair, democratic and harmonious working environment that gives full play to the staffs’ potential.” In privately-run hospitals, if there is a union at all, it will most likely be controlled by management, much in the same way that enterprise trade unions in factories are.

As a result, nurses and other healthcare professionals usually have no option but to organize themselves and take forceful collective action if they want to improve their pay and working conditions.