At least 13 workers were killed and ten injured in a coal mine fire in the north-eastern province of Liaoning yesterday, while in Heilongjiang on 16 December, a gas explosion has almost certainly killed 19 miners, the official Chinese media reported today.

The fire at the mine in Huludao, Liaoning, was reportedly ignited during welding work in the construction of an auxiliary tunnel. The gas explosion at the Xiangyang Mine near the city of Hegang occurred mid-afternoon on Wednesday when 52 miners were underground. The Xinhua News Agency reported that 33 miners had escaped but, after 24 hours, 19 workers remained trapped with little hope of survival.

The carbon monoxide level in the Xiangyang Mine was 700 times the safe limit and temperatures were up to 65 degrees centigrade making immediate rescue impossible, Xinhua said. One 20-year veteran described the rescue operation as the most dangerous he had ever experienced. 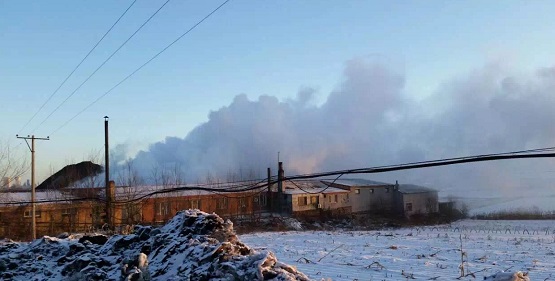 The Xiangyang Coal Mine in Hegang, Heilongjiang. Photo CCTV News

While coal mine safety in China’s coal heartland of Shanxi has improved over the last decade, accidents in the northeast and remoter areas of southwest China remain a common occurrence. Coal mining in these areas tends to be more difficult and expensive, and local governments generally do not enforce safety standards.

Less than a month ago, on 20 November, a fire which started on a conveyor belt at the Xinghua Coal Mine in Heilongjiang killed at least 21 miners. The mine was owned and operated by the troubled Longmay Mining Group, the state-owned conglomerate which reported losses of six billion yuan last year and, in September this year, announced plans to lay off 100,000 employees, about 40 percent of its workforce.

In China as a whole, there were 931 coal mine deaths in 2014, the first time the annual death toll had fallen below 1,000 for at least two decades. However, a lot of this reduction can be accounted for by falling production. In many coal mines, safety standards per se have not significantly improved, and the lack of profit means that even less attention is being paid to safety.