One of the most intractable obstacles to the development of the workers’ movement in China has been the inability of workers to maintain the solidarity and momentum created by isolated victories in the workplace.

Workers know how to organize strikes and protests and they increasingly know how to bring the boss to the negotiating table and conclude a collective agreement. But after the agreement is signed, all too often, it is back to business as usual. Having achieved what they set out to, many workers feel they should just keep their heads down and not cause any trouble. And because worker representatives no longer have any standing in the factory, they can become targets for management retribution and forced to leave.

The question of what to do after a successful strike or protest and how to keep the workers’ movement moving forward was the topic of a forum at the Panyu Workers’ Service Centre in Guangzhou last weekend. The forum was hosted by workers from the Liansheng Moulding factory who had for the first time in two decades forced their boss to give workers the severance pay they were entitled to. It was a significant victory but now, all the workers at the forefront of the struggle had left the company.

Some of the workers were concerned that the valuable lessons learnt and experiences gained from their collective action would be lost.  Tan Zhenmiao, one of the Liansheng representatives told the gathering of workers, staff from labour rights organizations and students:

It is very important that we carry on the fight in our new work places. We have to spread the latest news and information about the labour movement and share our experiences with our new co-workers. We have to cultivate their awareness and their ability to better defend their legal rights.

“These experiences will not be lost,” argued Huang Xiaojuan, one of the leaders of the Gaoya Jewellery factory strike in September, who now works at the Panyu Centre.

The Centre will keep providing trading sessions on collective bargaining strategies and those who are interested can join our worker representatives committee and make an even bigger contribution to the labour movement in China.

Cai Manji, who was the chief worker representative for more than 130 workers during the Hengbao Jewellery factory dispute last year added:

The commitment and dedication of workers today means a better future for generations to come. We are paving the road for tomorrow. The actions of Chinese workers in defending their rights are a wakeup call for the government. We can already see that the government is shifting its focus gradually from economic development to addressing workers’ grievances and improving their wellbeing.

The director of the Panyu Centre, Zeng Feiyang, stressed the importance of not just learning from experience but applying that experience to situations in the future: “The victory of workers at Liansheng was exemplary and significant. It utilised various collective bargaining strategies and is a model that many should observe and follow.”

Zeng said the success of the Liansheng workers could help promote and popularize the Code of Collective Bargaining developed by the Panyu Centre and others. The Code is based entirely on the first-hand, practical experience of workers and labour organizations in conducting bargaining on the ground. It is the first grassroots blueprint for collective bargaining in China and could prove to be an invaluable tool in developing and broadening its use in factories across the country.

Throughout the meeting, workers were constantly reminded of the importance of solidarity in the workers’ movement. Chen Huihai, a former factory worker who now works at the Panyu Centre, pointed out that the victory at Liansheng was the result of the workers’ unswerving solidarity despite their differing demands. He said:

I told those workers who had second thoughts about standing up to the boss, if you quit and go it alone, you are a sitting duck. We can only prevail if we act collectively.

Worker representative Guan Dongwei concurred:  “When the local labour authority and police asked me to go out and ‘have meals’ with them, I said I will never do anything with you unless the other representatives are present. That is the strategy I learned at the Centre.” 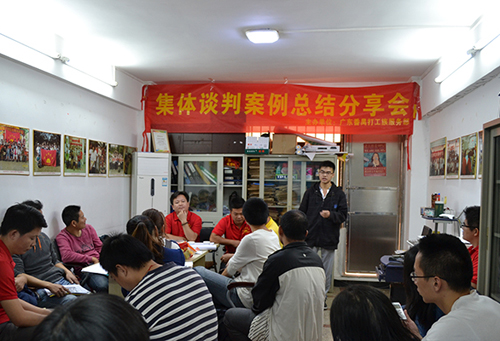 For many workers at Liansheng, and those present at the forum, the star of the show was the Liansheng workers’ chief representative Lin Ye. The workers called him Chairman Lin, a remarkable title for a humble migrant worker from the countryside of Guangdong but one he earned through his relentless work and outspoken leadership:

I was constantly being pressured and intimidated, but my brothers and sisters had my back and I had to nothing to lose. A government official tried to scare me by saying: ‘Lin, do you know that even if the workers get compensation, the representatives won’t see a penny, especially you!’
I told him to shut up and said he was the one who should be worried because it was his government job that would be in jeopardy if our dispute with Liansheng wasn’t properly resolved.