The mother of detained labour activist Zeng Feiyang (photo below) is suing the Xinhua News Agency for one million yuan and a public apology after it published a defamatory article about Zeng in December last year. 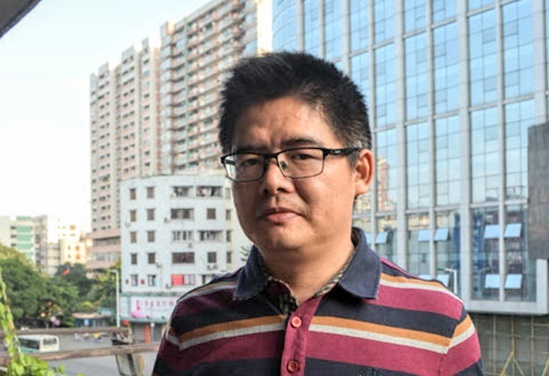 Zeng’s mother, Chen Wenying, is also suing the local police and the Guangzhou detention centre where Zeng is being held for their part in a coordinated media smear campaign against her son.

Chen stated in her lawsuit that:

Zeng Feiyang’s father is undergoing chemotherapy for late stage cancer. Zeng Feiyang himself has been deprived of his freedom and his right to see a lawyer. So this great and historic case will now be taken up by this old woman.

Zeng, the director of the Panyu Workers Service Centre, was detained on 3 December 2015 in a massive crackdown on labour rights activists in the Guangzhou region, and has since held in the Guangzhou No.1 Detention Centre on charges of “gathering a crowd to disrupt social order.”

On 22 December, the state news agency Xinhua ran a story accusing Zeng and his Centre of causing unrest among workers and making a variety of accusations about Zeng’s character. The Communist Party newspaper, the People’s Daily, and China Central Television news ran similar stories within a matter of days.

In all, Chen and her lawyer are suing five entities: Xinhua News Agency, its online platform Xinhua.cn and the story’s author, Xinhua reporter Zou Wei, as well as the Guangzhou Detention Centre and the Public Security Bureau in the suburb of Panyu, which arrested Zeng.

The lawsuit asks that:

In the four months since the crackdown on labour activists, Zeng is the only detainee who has not been allowed to see a lawyer, despite numerous attempts by his lawyer to visit the detention centre.

Just last week, another activist, He Xiaobo, was released on bail, leaving just Zeng and Meng Han, his colleague at the Panyu Workers Centre, in detention.

Although most of the activists have now been released, they remain under surveillance and, for the most part, have been unable to resume their important work providing workers who are engaged in collective struggle with the advice and support they need to successfully resolve their disputes through collective bargaining with management.

Meanwhile, the need for civil society labour organizations remains as pressing as ever in the Guangzhou region as factories continue to close down and or relocate without giving employees the compensation, social insurance contributions and other benefits they are legally entitled to.