Migrant children in Beijing - dreams amid the rubble 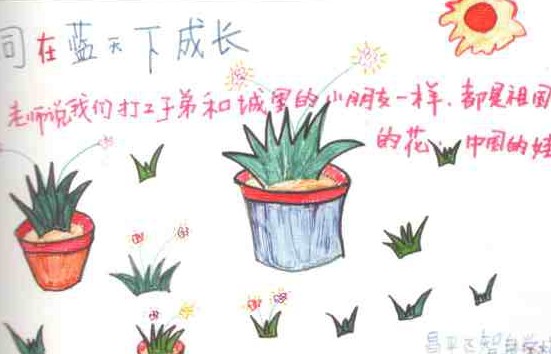 Grow up under the same blue sky – Teacher says that both we children of migrant workers and the city kids are the flowers and babies of our motherland.*

Several little boys were lining up in front of a tap in the corner of a school playground in suburban Beijing waiting to clean their lunch boxes. In the nearby classroom, another boy, about six or seven years old, was putting away his clean lunch box carefully into a plastic bag and then into his school bag.

I was touched by these scenes. Some people say China is like Hong Kong 30 years ago. I am not sure this is true but these scenes did remind me of growing up in Hong Kong in the 1970s when parents were working hard to make a living, and children had to take care of themselves, and help out in the family. It was common at that time for older sisters to drop out of school to work to support the family. The difference was that Hong Kong children did not face systematic discrimination because of their residence status.

A young boy has instant noodles for lunch in a classroom

Before putting the finishing touches to the final part of my report on the children of migrant workers (published next week) I joined a group organized by the Hong Kong-based Sowers Action visiting two migrant schools in suburban Beijing. After reading many reports on migrant schools: about how unsafe their buildings were and how poorly paid teachers were I wanted to see the conditions for myself.

Like most migrant schools, the two I visited were privately operated, however they were unusual in that they had obtained official sanction from the city government. There are close to 300 private migrant schools in Beijing, and less than 20 percent have obtained such approval.

Hua Ao School, located in Haidian district in the northwest of Beijing, was founded in 1998 by Wang Guiyun, a former teacher from Jilin province. She joined her husband in Beijing in the 1990s and worked as vegetable farmer in the suburbs. When Wang attempted to send her daughter to school in the city, like many other migrant workers at the time, she ran into many difficulties, and in the end, she needed to pay as much as 12,000 yuan in donation fees in order to secure a school place for her daughter. Encouraged by her fellow migrants, in 1998, Wang set up a school in her vegetable field for the migrant children in the neighborhood.

Like many other schools, Hua Ao has been ordered to close down and move many times. The story of Hua Ao School, which reflected the experiences of many migrant schools, caught the attention of a TV station and was made into a documentary. Watch Part One and Part Two. In 2001, the school moved to its existing site - a four-storey deserted factory building near Shijing Shan - below

The School obtained approval from the government to operate its primary and middle school sections in 2004 and in 2008 respectively. Wang was later awarded of the “Star of Beijing migrants,” and the school now has more than 900 students in 23 classes, with 46 teachers and six support staff.

Zhengxing School, also in Haidian, was set up by a group of retired teachers in Beijing in 1999. The school has moved three times and is now located on three separate sites. The three campuses have a total of 1,200 students, 46 teachers and seven support staff, running classes from nursery to middle school. It obtained government approval in 2005.

First impressions
Compared with state schools, these two schools looked primitive, although not deplorably so. In fact, these two schools have received considerable support from the private sector. Hua Ao’s laboratory was donated by a private enterprise, and the multi-media room was donated by the municipal educational department. These two rooms are fitted with shiny new furniture and equipment and pose a stark contrast to other parts of the school. Ordinary classrooms are dilapidated with peeling walls. See video of music lesson with old out of tune piano.

Wash rooms are open with no private cubicles. Even though Hua Ao is equipped with flush toilets, no water was connected and the stench was strong. Zhengxing School does not have flush toilets. The playground of Hua Ao was full of cracks and bumps. The playgrounds of both schools had ping pong tables and other facilities, as well as serving as parking lots. During my stay, I tripped quite a few times.

Children exercise in the playground.

Toilets shared by both students and teachers in Zhengxing school

In August 2008, the central government waived textbook and miscellaneous fees for students in compulsory education in the cities. However, the students in these schools are still required to pay tuition, textbook and miscellaneous fees, amounting to about 500 yuan per semester. The municipal government only provides an 80 yuan subsidy to each student each semester, and occasional one-off donations to the schools.

Teachers in urban state schools can earn between 2,000 yuan to 6,000 yuan including benefits, but the average salary for teachers in migrant schools in Beijing is only between 600 to 800 yuan, with no social insurance. The minimum wage in Beijing is currently 800 yuan a month. Poor salaries and dim career prospect make it difficult for migrant schools to hire and maintain qualified teachers. Hua Ao School and Zhengxing School can only higher pay wages and benefits because of the support of Sowers Action. Even with this additional support, some teachers have to work part-time during weekend.

The workload in these schools is heavy; teachers in Hua Ao need to take care of boarding students and they work from 6.am to 10.pm. Although Zhengxing School does not have boarding students, its teachers have to escort the children home on the school bus.

Many migrant school buses are severely overloaded. In 2006, more than a dozen students were injured in a school bus accident. In response, the government placed restrictions on the use of school buses. To comply with these regulations, in some cases, school buses need to run four or five times each morning between 5:50 and 7:50.am. Students also need to pay more than 100 yuan a month in transport fees. The system creates a heavy burden for the students, their families, and the teachers.

Students’ daily life and dreams
Most of the children I talked to said that after school or during the holidays, they would help their parents with household chores, do homework or play in the neighborhood. They went to downtown Beijing only occasionally and had a limited knowledge of the city. Zhengxing School was located in a particularly remote and underdeveloped area. Most students’ families are vendors or scrap metal collectors. Although not all families are poverty stricken, very few of them have a computer and many are without a toilet in their homes.

Entering the village where a student lives

The hut where my student interviewee lives

The students told me that they wanted to be actresses, athletes, sport commentators and teachers. None of them said they wanted to go back to their home towns to be farmers. Most students preferred to live in Beijing and did not have much knowledge of their “hometowns.” However, when I asked where they would be after they graduated from primary school, most said that their parents would sent them back home to study middle school. This is because without a Beijing hukou, they cannot take the university entrance examination in the city. Other students said they would apply for vocational schools. This is the route the government is promoting right now. Although they are not excluded from going to university, this seems to be a very distant dream.

Students’ drawings and writing
During my stay in Beijing, I also visited a NGO, Aspirations of Migration, which collects the writings and artwork of migrant children and publishes them in a monthly magazine. These writings reflect their world view, their worries and their dreams. My translation below of a sixth grader’s essay is typical, and shows that, despite their unfavorable environment, many children are determined to strive for a better future.

My father is a decorator. He works very hard every day, from the early morning to late at night. In the morning, when the first rays of the sun shine on the earth, carrying his tool box, father leaves home for work. He has to catch the first bus of the day. Year after year, rain or shine, he never takes a day off. Even when he is sick, he still goes to work. He will not get paid if he takes a day off.

My father is not tall but he uses his board shoulders and strong back to open the blue sky for our family. Because of love, even though our whole family is living in a rented place of less than ten square meters, we are still very happy. Because of love, I am happy living in this busy city. Father, thank you! Even though I am not doing very well at school, I will try my best to return your hard work, to you, my beloved and respected father


* The Voices of Migrants - A Collection of Paintings and Pictures by Migrant children in Beijing (流动的心声 - 北京流动儿童绘画摄影作品集）, reproduced with the permission of the Home of Beijing Migrant Workers Cultural Development Centre （北京工友之家文化发展中心）.