A new report from Zhaopin.com, a major Chinese employment website, shows that wages for new graduates have fallen by 16% in 2017 compared to last year. The data is the latest in a line of recent warnings about the job prospects of new graduates, and raises concern over future of China's job market.

The government has made employment for graduates a top priority, and has recently called the issue a matter of “social stability”. Over half of those entering the labour force this year are college graduates, and officials are searching for solutions.

Last week Premier Li Keqiang looked to the growth in the “new economy”, support for job training and the entrepreneurship of graduates themselves to address the problem, and called on officials “to ensure the graduate employment rate is not lowered.” There are signs, however, that these efforts may not be enough to provide good jobs for graduates.

The Zhaopin survey showed that nearly 40% of new graduates had found a job that was not in line with their educational training. Those who studied education, for example, were among the least able to find a satisfactory job in their profession, and were among the lowest paid, according to the survey data. A China Labour Bulletin research report shows that Chinese teachers have long suffered from heavy workloads and low pay, and many of those who graduate from teacher colleges are forced to find jobs in other industries.

As the situation worsens, more grads are choosing to return to college and continue their studies, in an attempt to postpone entering the job market. A record 2 million students registered for graduate school admissions test in 2016, up 13% compared to the previous year, and the number of graduate school applicants has also been growing significantly. 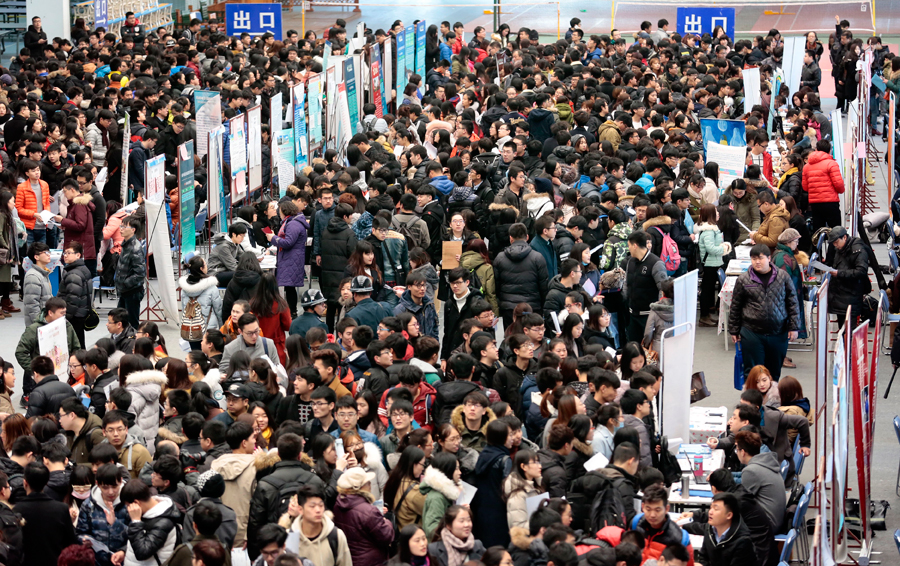 While overall pay levels may be suffering, some surveys has showed steady pay increase in some industries like internet services and real estate. These industries, however, are a very small portion of the job market. According to the latest government statistics, real estate and information technology together accounted for just 4.2% of total employment of urban jobs, while industries like manufacturing and construction accounted for 28.1% and 15.5% of respectively.

Although government officials encourage students to find jobs in services and emerging industries, there are actually signs that the service sector is failing to provide the type of high-skill, high-paying jobs that graduates look for. While the service sector has expanded rapidly in recent years, most jobs in this sector are low paying, and provide precarious working conditions, often without labour contracts, secure employment or benefits.