A two day strike by more than 1,000 ship workers at the Jiangsu Eastern Shipyard, owned by Singapore-listed JES International, ended on 11 December after management promised to pay workers the five months’ wages in arrears they were owed.

The strikers had taken bold action, blocking the national express way and the adjacent bridge over the Yangtze (see photos below), action which had forced the local government to intervene and resolve the dispute as quickly as possible. 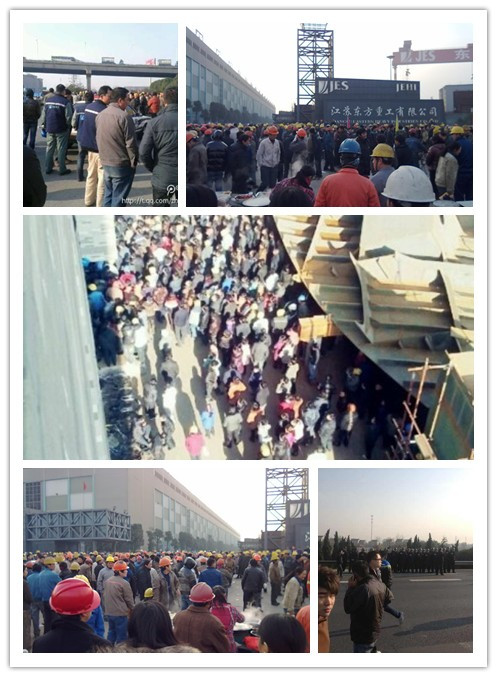 On 12 December, JES International posted an announcement saying that the strike had been caused by some subcontractors delaying payment of wages to their workers. The company claimed that subcontractors usually hired migrant workers and it was common practice for them to defer payments to ensure that workers did not leave their posts without notice.

Yet, the company announcement did not reveal the whole story. The shipyard’s formal employees, predominately local workers, had not been paid for the past five months either and many were jealous of the subcontractors’ success.

“After the subcontractors’ protested, the local government only cared about their problems and ignored ours,” said one worker. “Neither the trade union nor the labour bureau helped us get our salary back.”

However, unlike the subcontracted workers, the shipyard’s formal workers were quite hesitant when it came to protests or strikes. Their salaries were relatively high and management had reportedly told them they would be fired if they protested. As such, they felt they had more to lose.

As CLB noted in our commentary this month, the threat of dismissal for striking workers is very real and much more needs to be done to adequately protect workers’ representatives who stand up for the legitimate demands of their co-workers. However, we also stressed the value and importance of workers’ solidarity in pressing their demands. And in the case of the formal employees at the Jiangsu Eastern Shipyard, this crucial element seems to be missing, at least for the time being.

Some formal employees argued that wage arrears was not as big a concern for them as it was for migrant workers, but others said if they did not get their back pay by the end of the year, they would also take action.

China’s shipbuilding industry has been severely impacted by the sluggish global shipping market. The latest data from the National Shipbuilding industry shows that the number of new orders in the first ten months this year was down nearly 50 percent on the same period last year, and in the first nine months of this year, profits for large shipbuilders were down 40 percent.

JES noted in its announcement that the company’s need for working capital was high given the number of vessels being built and the fact that some customers were asking for a delay in deliveries but it stressed that this was a short term issue that could be resolved.

One half-completed vessel from the shipyard could be seen floating in the Yangtze last week, prompting one netizen to suggest the workers had placed it there as part of their protest. This, sadly, turned out not to be the case.