Increases in China’s minimum wage begin to stall in 2014

Less than two thirds of China’s provinces and regions increased their minimum wage in 2014, according to data collected by CLB from official media sources this year. In all, 20 regions raised their monthly minimum wage by an average of 13.1 percent in 2014, significantly lower than in previous years.

Twelve regions did not increase the minimum wage at all in 2014, including the economic powerhouse of Guangdong where the minimum wage has remained unchanged since 1 May 2013. The Guangdong municipality of Shenzhen, however, sets its own minimum wage, and that increased by 13 percent to 1,808 yuan per month on 1 February 2014.

The minimum wage in Fujian also remained untouched in 2014, while the monthly rates in the other major manufacturing centres of Zhejiang, Jiangsu and Shanghai increased by 12.2 percent, 10.1 percent and 12.3 percent respectively. The capital Beijing increased its monthly minimum wage by 11.4 percent on 1 April 2014.

The highest percentage increases in the minimum wage were in the less developed western regions of China. The highest increase was 21.4 percent in Guizhou, followed by 19 percent in Chongqing and Qinghai, and 16.7 percent in Sichuan. In all these regions, however, the actual minimum wage is still only around two thirds of the rate in Shanghai and Shenzhen. 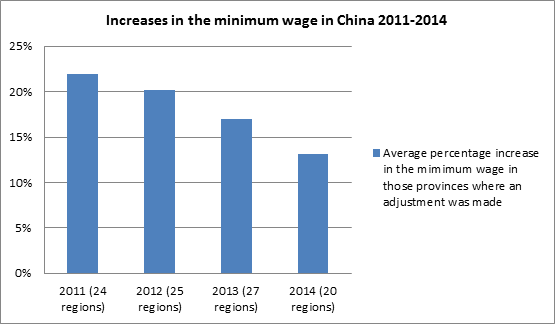 If the 12 regions where there was no increase in 2014 are factored into the national average, the increase for 2014 falls even further to just 8.2 percent.

The slowing of minimum wage growth is partly explained by China’s low inflation rate over the last year; the consumer price index hovered at between just 1.5 percent and 2.5 percent in 2014. However, the slowdown in the economy in general and manufacturing in particular, plus a prolonged credit squeeze, has put additional downward pressure on wage growth and as a result many low-paid workers have seen next to no increase in take home pay this year.

See CLB’s article on Wages in China for more details