One of Guangzhou’s best known labour rights organizations, the Panyu Workers Centre, has called on the municipal government to shelve plans to introduce new regulations that would ban so-called “illegal social organizations” (广州市取缔非法社会组织工作细则).

On 16 October, the Guangzhou government announced an unusually brief ten-day public consultation period for the highly controversial regulations but the Panyu Centre was still able to submit a detailed response outlining the flaws in the proposed legislation and suggesting an alternative approach that encouraged rather than stifled the growth of civil society in the city. 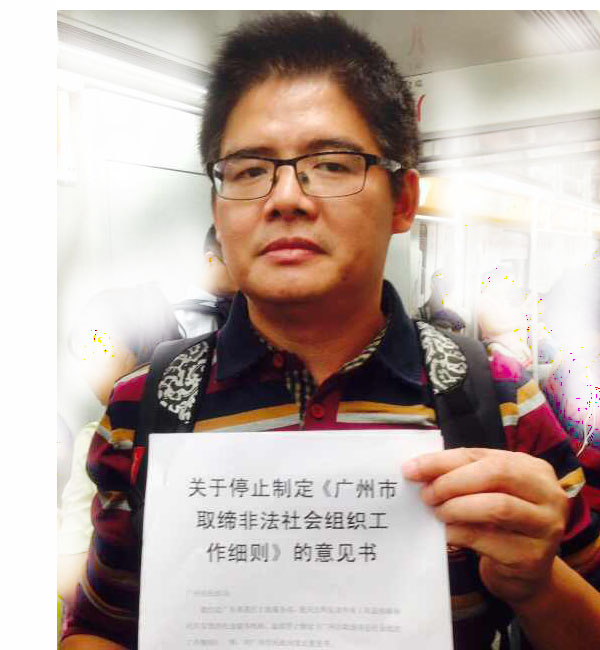 In its counter-proposal, personally delivered to the Guangzhou Civil Affairs Bureau on 23 October by Centre Director, Zeng Feiyang (left), the Panyu Workers Centre points out that the proposed regulations go against the Party Central Committee’s recent Decision on Major Issues Concerning the Comprehensive Deepening of Reform, which advocated the development of an "innovative social governance system" and stated explicitly that China should "leave public services and those matters suitable to be provided by social organizations to the social organizations themselves." The Guangzhou regulations by contrast, the Panyu Centre points out are: “full of words like ‘ban,’ ‘investigate,’ ‘transfer to judicial organs’ etc., which fill readers with a sense of foreboding.”

The Panyu Centre also points out that the Guangzhou regulations are based on archaic and now largely irrelevant central government provisions dating back 15 years, and ignore the vital contribution to the development of society made by non-governmental organizations over the last decade. Moreover, it says, the proposed regulations focus on organizations that failed to register with the authorities but completely ignore the barriers to registration created by the authorities themselves.

The Panyu Centre argued that China has too few rather than too many civil society organizations and, as such, the authorities should make it easier not more difficult for such groups to obtain legal status while at the same time guarding against malfeasance.

In order to achieve this aim, the Panyu Centre suggested that the authorities initiate a thorough investigation of all civil society organisations in the city and base their assessment on the views of the ordinary people who benefit from such services rather than just local officials. And if any legislation is introduced in the future, the Panyu Centre said, it should strictly adhere to the principles of “innovative social governance” as outlined by the Party Central Committee.

Many other civil society organizations, academics and commentators in Guangzhou have also spoken out against the proposed regulation, saying the proposal goes against the policy announced by former Guangdong Party Secretary Wang Yang in 2012 to relax registration procedures for non-governmental organizations. It is hoped that the determined and forceful response of these groups to the draft regulation will make the authorities think twice before pushing ahead with the proposal.