Workers at Ansteel in Guangzhou returned to work this morning, ending their week-long strike, after local police branded their protests illegal and threatened to arrest any workers who continued to demonstrate, even inside the factory grounds.

The state-owned company issued written warnings to at least 100 strikers, while offering those who returned to work a temporary bonus of 100 yuan a day. In a minor victory for the workers however, the company promised to cancel the planned pay system reform that had triggered the strike on 17 February.

Despite retuning to work, some workers still plan to take legal action against the company while others are looking for alternative employment. 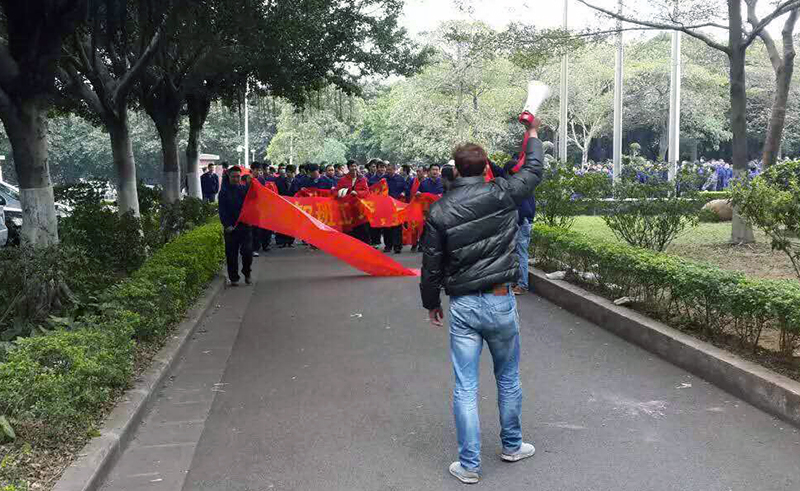 The new management soon began to lay off staff and increase workloads and then in December, the company started to put workers on leave at 80 percent of the Guangzhou statutory minimum wage.

The final straw came on 15 February when the company issued an open letter announcing a new performance-based pay system that would significantly reduce workers’ wages.  To add insult to injury, it added that the company trade union had already accepted the plan on the workers’ behalf.

Several hundred workers mobilized immediately, collecting money via the WeChat Red Envelope system to pay for banners, loud speakers etc. The strike began on 17 February with workers demanding compensation for contract termination and to sign new contracts with Ansteel directly. The strike spread quickly and by the third day they had effectively shut down production. Large numbers of police with riot gear and busses used for mass arrests arrived at the factory and blocked the factory gates.

On the third day of strike, the head of the company union head was sent by management to meet with workers and attempt to persuade them to accept the deal and return to work. The union head offered to return to the old wage system but workers rejected the offer and ignored the union head.

“How can we trust the company now? How do we know they won’t do these things again?” said one worker at the time. Workers were particularly disappointed in the union’s claims to represent them, saying the union was “absolutely useless. There is nothing democratic about it.”

Workers were outraged at the inability of a large state-owned company to abide by its basic legal obligation to compensate laid off workers: “If you want to get rid of your workers, you just pay them compensation – isn’t that normal?” one said.