Guangdong’s factory recruiters forced to cast their nets even wider

In the corner of a noticeboard outside one of Shenzhen’s main job recruitment centres is evidence of a subtle shift in the balance of power in Guangdong’s factories. An advertisement for 100 production line workers at Foxconn states that anyone aged between 16 and 42-years-old can apply. See photo below.

This may seem like an unremarkable stipulation but, even just a year ago, there was no way you would have seen such a broad age range in a recruitment ad for factory workers in China.

In the early decades of China’s economic reform and development, factory bosses had free rein to choose just about whoever they wanted to work on their production lines. Invariably, they chose young women from the countryside who they thought would work long hours for low pay and not cause any trouble.

As the supply of young migrant workers started to dry up in the 2010s, factory owners in Guangdong had to broaden their horizons, recruit more men and loosen their age restrictions. They soon started accepting workers in their late 20s and early 30s, and now Foxconn, the world’s largest manufacturer consumer electronics, is willing to take on workers in their early 40s. And some factories in Shenzhen, such as BYD, have raised the bar even higher, accepting men up to 40-years-old and women up to 45-years-old.See below. 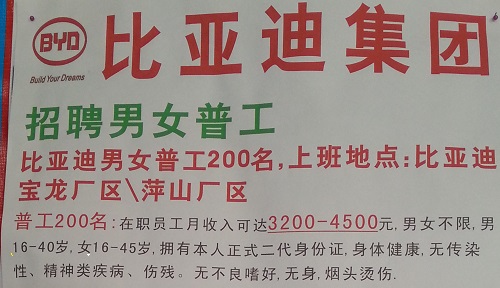 These companies realise that older workers are more likely to be settled in Guangdong with a family to support and thus less likely than their younger counterparts to move elsewhere. This means a more stable workforce but it also means that factories can longer pay subsistence wages. Salaries and benefits are still below what they should be to guarantee a decent living but at least factory workers do now have greater bargaining power and they are putting that bargaining power to good use.

The situation for workers in the service sector however is not quite as encouraging. “Customer service executives” at Tencent and staff at CITIC Bank’s credit card customer service centre, for example, can earn about the same as or even more than Foxconn workers. However, if you are over 28-years-old do not bother to apply.

At the Bank of Communications, women applying for a job as a “lobby assistant manager” have just a five-year window between 20 and 25-years-old and must have “regular features.”

Quite why banks think that young women with regular features are best suited to work in their branch lobbies is a mystery to me but it is not something that is often questioned in China. Ask a recruiter why certain service or professional positions are limited according to age and gender and they will say that is simply the natural order of things or even that it is scientifically determined.

Currently the demand for white collar jobs is still high enough for employers to get away with such blatant discrimination but hopefully young graduates will eventually begin to see that life as a bank customer service officer is not the greatest job in the world and start to look at career opportunities elsewhere.

Who knows, in the fullness of time, the banks might actually be forced to hire back the hundreds of thousands of senior staff they laid off during the massive restructuring of the financial sector in the 2000s.