Foxconn, the world’s largest electronics manufacturer, has dismissed 16 workers at its massive Longhua facility in Shenzhen for staging a protest over the alleged non-payment of social insurance contributions.

About 50 workers displayed a banner on 8 September (see photo below) saying “Foxconn is deceiving its workers by withholding their rightful benefits.” Dismissal notices were handed out to 16 employees over the next three days stating that the workers’ action had “seriously harmed the company’s reputation.” 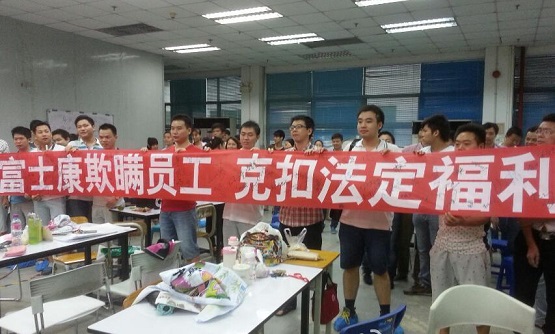 One of those dismissed, Mr Huang, had been working at the Longhua complex for nine years. He explained that Foxconn had only made contributions to his social insurance account according to his basic salary rather than his total income. This was precisely the same issue that triggered the massive strike of around 40,000 workers at the Yue Yuen shoe factory in neighbouring Dongguan last year.

In Foxconn’s Longhua plant, however, Huang said most of the more than 100,000 employees were still unaware of the issue and that the company had acted quickly to get rid of the perceived trouble makers before discontent spread. He quoted a human resources manager at the plant as saying: “We easily dealt with about 300 workers who tried to cause the same kind of trouble last year; you guys will be a walk in the park for us.”

Huang’s claims were backed up by dozens of co-workers at the CESBG working group at Longhua which produces servers for IBM and Dell. Mr Li, a 27-year-old from Chongqing who went to Foxconn right out of vocational school and now works as a test engineer, said:

For all I know, we have been kept in the dark for years. We only found out that Foxconn failed to pay the lawful amount when we went to the local social security authority and started to ask questions. However, they said there was nothing they could do about the company’s misbehaviour other than telling us to file a lawsuit.

The workers only resorted to protest action after the company refused to discuss the issue with them. In addition, to holding up banners, some of the workers protested outside the executive office building after they heard that Foxconn’s founder and president, Terry Gou, was inside. Huang said:

The management called for a meeting right after we put the banner out on the 8th but the talks turned out to be fruitless. The company denied any wrongdoing. And both the labour authority and the factory union said their hands are tied and asked us to go to labour arbitration.

“We want to settle the dispute through negotiation. But the company sacked us before we could organise more workers to join the effort,” Huang added.

The sacked workers are now considering taking the matter to the municipal trade union federation. They also plan to get expert legal advice but as Huang pointed out: “At the end of the day, everything has to come from the workers themselves.”

National legislation clearly states that the employers’ contribution to pension funds etc. should be based on a percentage of wages paid rather than the basic wage but local implementing regulations can often complicate the procedures.