A two-month-long strike by 59 workers at Tongxin Jewellery in Foshan ended on 27 August after management, which had initially refused to negotiate, finally made concessions during negotiations with the workers’ democratically-elected representatives.

The workers’ chief negotiator, Zhu Xinhua, said the workers agreed to end the strike after the company promised to meet eight of their demands, including payment of social security and housing fund contributions, and compensation for not taking annual leave. The workers made some concessions of their own and the two sides agreed to continue discussions over the payment of a higher basic salary during the low season.

“We welcome the company’s change in attitude and are happy that the two parties can now have a healthy dialogue on an equal footing. Knowing when to take a step back while maintaining your bottom line is crucial to successful collective bargaining,” Zhu said.

Another worker representative, 31-year-old Zheng Hongshuang, stressed that the negotiations had been tough: “Management is much stronger than us and at one stage we got quite frustrated. But the remarkable solidarity of our group of 59 workers kept us going over the past 72 days.”

The workers’ solidarity eventually secured support from the local government and the Guandong Provincial and Foshan Municipal Federation of Trade Unions. Both organizations put pressure on Tongxin to come to the negotiating table and respond to the workers’ demands. As Zhu noted:

No matter how reluctant the government and the union federations might have been at first, they finally did the right thing. We are looking forward to setting up a factory union in the near future and formalizing collective bargaining meetings between union representatives and the company as soon as possible. 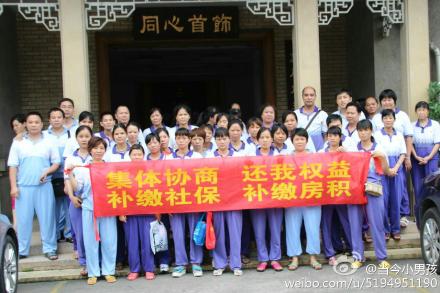 Tongxin Jewellery workers stage a protest outside the factory