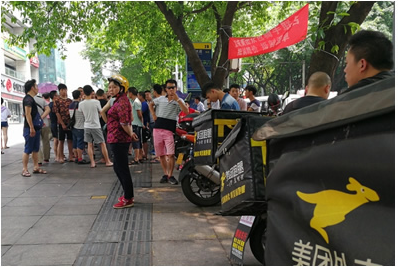 A group of Meituan food delivery workers in the northern city of Weinan staged a symbolic protest last month, reportedly over their onerous working conditions and the fact that, even though they are not technically Meituan employees, they still have to wear the company uniform and essentially act as brand ambassadors.
08 June 2021

The Shenzhen government is in the process of amending its Employee Wage Payment Regulations for the first time since they were introduced 17 years ago.
01 June 2021

An otherwise unremarkable government official, Wang Lin, has become an unexpected internet celebrity. A video featuring the middle-aged, bespectacled Wang moonlighting as a driver for food delivery giant Meituan has gone viral and reignited discussion on the pay and conditions of workers in the gig economy.
06 May 2021

China’s best-known food delivery worker activist, Chen Guojiang, was detained on 25 February and has been held at Beijing’s Chaoyang district detention centre since. In mid-March, his family was formally notified that Chen is accused of “picking quarrels and provoking trouble” (寻衅滋事), the catch-all charge used by the authorities to crack down on activists. He was formally arrested on 2 April.
07 April 2021

Food delivery worker, Chen Guojiang has been accused of “picking quarrels and provoking trouble” (寻衅滋事), the catch-all charge used by the authorities to crackdown on activists.
25 March 2021

A review of the newly published book by Manfred Elfstrom, Workers and Change in China: Resistance, Repression, and Responsiveness.
23 March 2021

China was one of few countries that managed a reasonable economic recovery during the Covid-19 pandemic that began last year. However, China’s workers are yet to see their share, and, for many, wage levels and working conditions have deteriorated.
03 February 2021

China’s economic slowdown, combined with rapidly shifting patterns of employment and the ongoing Covid-19 pandemic, resulted in a marked decline in the number of collective protests by workers last year.
27 January 2021