Factory workers cannot rely on the local government; they need a union to bargain with management

The massive strike at the Yue Yuen shoe factory complex in Dongguan in April highlighted the growing demands of many workers in China for a decent pension and welfare benefits. Local governments and employers are now beginning to listen to those demands but their response has not always been welcomed by the workers.

More than 5,000 workers at the Viasystems circuit board factory in Zhongshan went out on strike last week (see photo below) after the company readjusted social security and housing fund payments in line with local government policies which were aimed at bringing migrant workers into the social security system. 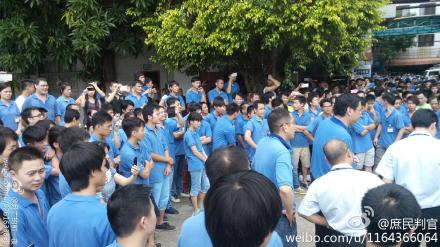 The workers complained that the company complied “all too happily” with the local government’s call to pay more social security but did so by taking money out of the workers’ pockets.

Under the new scheme, both the employer and employee have to pay five percent of the worker’s monthly salary into the city’s social security and housing fund. However, the company refused to adjust employee salaries accordingly, so the workers ended up being paid several hundred yuan less at the end of every month.

Many of the younger migrant workers had no intention of working at the factory for a long period and had little interest in a pension or the housing fund, which is designed to provide home buyers with low-interest loans.

“How many assembly line workers can afford a down payment on a property in this city? How many of us will work at one factory until retirement? It is a system that takes from the poor and feeds the rich,” said one worker, adding that: “We just want more money at the end of the month, that’s all.”

The Zhongshan strike shows once again that top down administrative measures, however well-intentioned, rarely produce the desired effect for workers because employers can always turn the situation to their own advantage. When local government’s raise the statutory minimum wage, for example, employers usually comply but will often cut employee benefits and bonuses at the same time. See CLB’s latest research report on the workers’ movement for more details.

However, there might be some cause for optimism in the future. Following the Yue Yuan strike, the Guangdong Federation of Trade Unions has pledged to give workers a stronger voice in the workplace by implementing democratic elections in all enterprise trade unions across the province within the next five years.

The chairman of the Guangdong union, Huang Yebin, has publicly acknowledged that the enterprise union at Yue Yuen failed to play its role adequately and that democratic union elections are now necessary if the union is to represent the workers and bargain on their behalf.

If a strong and representative trade union can be put in place at the Viasystems factory in Zhongshan, that union will be able to stand up to management and make sure that any adjustment to the employees’ social insurance payments does not lead to a pay cut for workers at the end of the month.