At least 11 workers were killed in the early morning of 27 November when a gas explosion ripped through a coal mine in southwest China’s Pan county. There were 19 miners underground at the time and all the survivors were taken to a nearby hospital for treatment.

Pan county is part of the Guizhou municipality of Liupanshui, which together with the neighbouring municipality of Qujing in Yunnan forms one of most deadliest coal mining districts in China. There have been at least six major accidents in these two municipalities over the last two years, according to the State Administration of Work Safety. See map below. 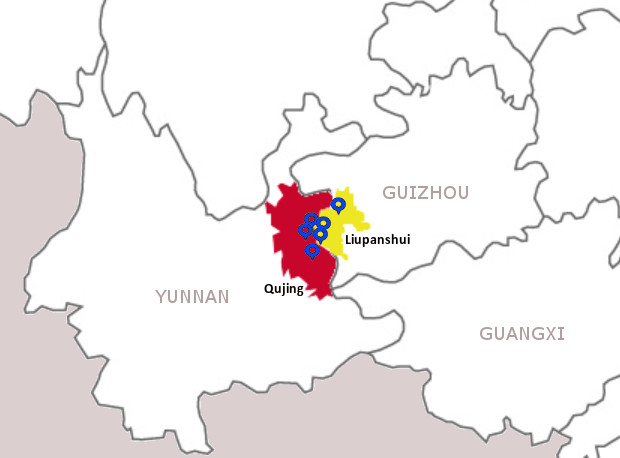 The total death toll in these six accidents was at least 101. There have in addition been numerous other smaller accidents and countless unreported incidents in the region.

Unlike the more established and relatively well-regulated coal mining regions of Shanxi and Inner Mongolia, the Qujing/Liushuipan district is a remote mountainous area with a large number of smaller, privately operated mines. It is also prone to earthquakes, which makes mining even more hazardous.

Nationally, the number of coal mine accidents and deaths has steadily decreased since the mid-2000s. However, the accident and death rates in Qujing and Liupanshui have remained at a tragically high level despite the dangers of mining in the region being known for decades. As far back as September 2000, for example, 118 miners died in an explosion at the Muchonggou coal mine in Liupanshui. Two and half years later, there was another explosion at the same mine which killed up to 40 miners on 24 February 2003.