At four o'clock in the afternoon, about 50 taxis were lined up in the early summer heat outside the Xiaqiao petrol station in Dongguan, waiting to refuel before the drivers changed shifts in an hour’s time.(See photo below). 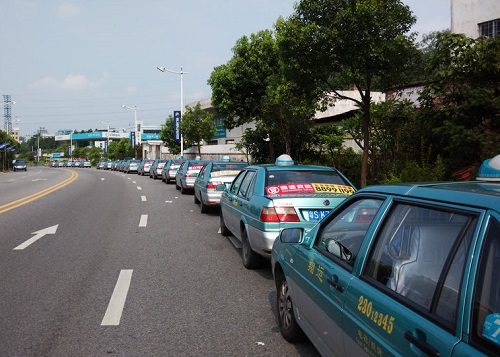 Across the road was a small white signboard that read “Taxi Drivers’ Diner” This partially open space, covered in an old plastic canopy is where Mr Li always has his dinner before beginning his 12-hour-long night shift.

“I can’t afford to be picky; a ten yuan lunch box is good enough for me,” said Li, a 41-year-old father of two who came to Dongguan in search of a better life for his family about four years ago. His home town is Changde, the small city in the neighbouring province of Hunan that has come to prominence this year as the site of a ground-breaking dispute at the Walmart store there, and as home to labour activist Wu Guijun.

Li explained that drivers changed over at five o’clock so as to give both drivers a chance to make a profit. “Night shift drivers make less money, so changing shifts at five gives us a chance to catch more customers on their way back home.”  In order to even things out even more, Li said, every week the two drivers switch day and night shifts, but that of course means that one of them has to do a 24 hour shift every week. They can’t afford to take a day off.

Even with this excessive workload, Li is currently only taking home 3,000 yuan per month, about the same as a factory worker. As reported last month, incomes for Dongguan cab drivers have plummeted in the wake of the government’s crackdown on the city’s sex industry. This combined with high monthly rental fees paid to the cab company and the need earn back the “tea money” (茶水费) paid to the cab company to secure a driving job in the first place means that many taxi drivers push themselves to the limit in order to make a living. In April, for example, it was reported that a taxi driver died alone in his rented apartment after working non-stop for 24 hours.

“During a bad day, you have no choice but to just sit in the cab the whole 12 hours. If you don’t work, you still have to pay the company. And the tea money is always like a monkey on your back. Everyone wants to earn it back as soon as possible.”

Tea money is basically a bribe paid by drivers to the taxi companies to get their foot in the door, and is usually several tens of thousands of yuan, or even more. While the monthly rental fees are 10,900 yuan for drivers in downtown Dongguan and 9,000 yuan for those in the suburbs.

Last month many drivers, including Mr Li, went on strike and staged a protest at the Dongguan transport bureau in a bid to get the rental fees reduced and the tea money returned. In the end, under pressure from the local government, the cab companies agreed to reduce rental fees for each cab by 1,250 yuan per month or just 625 yuan for each driver. Mr Li says, some smaller companies also agreed to pay back a proportion of the tea money but the big three taxi companies, which have fleets of about 300 vehicles, apparently remain unmoved.

The problem, Li explained, was that the drivers were not sufficiently united to put any real pressure on the cab companies or the government. “I was on strike and went to the transport bureau to protest with the others, but on the next day some of my colleagues ridiculed us, called us fools because they made a nice profit while we were on strike,” Li sighed. “We are like a heap of loose sand here, there is little solidarity,” he added.

Li further described the drivers as “a bunch a kids that cry for toys.”  “There is something fundamentally wrong with this job but we are not organised and don’t know how to join forces. That is why we don’t have a say in our pay and working conditions.”

Li and several of his colleagues are thinking about setting up an enterprise-level trade union but so far they have made little progress.  Apart from driver apathy, the key problem for taxi drivers trying to set up a trade union has always been resistance the local trade union federations, which don’t seem to view taxi drivers as workers or don’t know how to deal with the taxi companies.

As noted in CLB’s latest research report on the workers movement in China, the only successful taxi drivers union seems to be that in the Jinan suburb of Changqing. According to local government officials, Changqing has set up a democratically-elected trade union that can help resolve drivers’ grievances without the need to go out strike. Moreover, they say, one of the union’s elected officials is a former “trouble-maker” who is determined to stand up for his members’ interests. The union provides a channel of communication for drivers to express their grievances and for the local government to explain policy. Officials in Changqing hope their system can be used by other cities but this would require a willingness on the part of local authorities to talk and a great deal of trust from the drivers that their representatives were really on their side and not simply stooges of the government.

Just after 4.30.pm, Li’s day shift partner arrived at the diner. He was in a good mood:  “Business was OK today,” he laughed. “The hot weather helped.” Li shovelled down the last of his food jumped into the newly refuelled cab: “The rush hour is about to begin, I need to hurry.”