This is just one of hundreds of similar job advertisements at the Shenzhen Human Resources Centre that unashamedly state the required age, gender and preferred character traits of applicants.

There is of course little new here. For the first few decades of the economic reform period, employers were able to dictate who they would hire and how much they would pay them. Now, however, the labour market is changing; employees have much more bargaining power and long-standing shortages of workers mean that employers can no longer been so picky. But old habits die hard and even though there are many more jobs available than job applicants, a lot of employers still insist on placing ridiculous restrictions on who they will hire.

One of the more bizarre stipulations seen on the Shenzhen Human Resources Centre noticeboard last week was that security guards at the One Laser factory in the city’s Bao’an district should be under 40-years-old and preferably come from Sichuan. 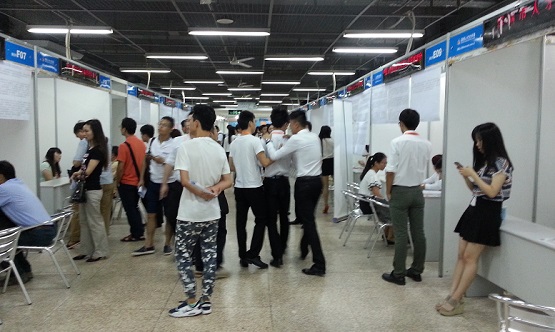 Company recruiters continually complain to anyone who will listen that it is impossible for them to find the right people for the jobs they are offering. Apparently, at no point do they stop to consider that it is their own pre-conceptions about who the right person should be that is creating their problems, or that, by adopting an equal opportunity approach to recruitment, they would have a much greater chance of finding the right person.

There are thankfully some signs of improvement. Five years ago, it would have been virtually impossible for anyone under the age of 30 to get a job in one of Shenzhen’s major factories. Today, the age-range being specified in many recruitment ads is from 18 to 48-years-old.

Foxconn is one of the city’s biggest employers and has also seen its fair share of labour troubles in the past and probably wants to avoid them in the future. The company now states on its Longhua factory recruitment poster that prospective employees must simply be of “working age - as stipulated by national laws and regulations.”

In other parts of China, a number of young professionals have taken employers to court for blatant discrimination and several of them have won important victories. Moreover, the publicity surrounding these cases, regardless of the outcome, has highlighted the issue of discrimination and gender stereotyping, and forced employers to question previously unquestioned assumptions.

There is clearly still a long way to go in tackling employment discrimination in China but at least the issue is now being discussed.