There were 165 incidents in September alone, and there is no indication that this upward trend is slowing down in October. One important reason for the increase in numbers is the greater visibility of strike action on social media in China; however there does seem to be an actual increase in strikes, most noticeably in the construction industry and in the inland regions of China.

The factories of Guangdong, which have been the traditional centre of worker activism in China, still play a key role in the workers’ movement but strike action is clearly spreading both geographically and across industrial sectors.

The manufacturing industry still accounts for a sizable proportion (45.2 percent) of all strike action but the biggest increase in worker protests this quarter was in the construction sector, up from just two percent (four out of 185 incidents) in the third quarter of 2013 to 14.8 percent (55 out of 372 incidents) in 2014.  The well-documented slump in China’s property market is the main driving force behind the flood of protests. Developers are saddled with declining sales, weaker credit availability and continued pressure from local governments to buy land. In these situations, it is the construction workers who are always the last to be paid.

It is important to note also that the lack of credit in the economy as a whole is affecting all sectors of industry with nearly half the total number of strikes (180 out of 372) being related in some way to wage arrears.

Meanwhile, the Strike Map clearly indicates a much more even distribution of strikes across the country. While the number of strikes in Guangdong remains about the same, its share of the national total continues to decline, down from 34.6 percent in the third quarter of 2013 to 19.1 percent this year.

Another notable development last quarter was the increase in demands for social security payments. The payment of social security contributions hit the headlines during the massive Yue Yuen factory strike in April and workers are now much more aware of the issue. There were 16 strikes in the third quarter of 2014 that were specifically concerned with social security, compared with only six in the same period of 2013.

One of the most significant strikes related to social security was the more than two-month stand-off by a group of 59 workers at a jewellery factory in Foshan. The workers exhibited incredible solidarity and discipline and eventually won support from the local government and the municipal federation of unions, and forced the boss to sit down and negotiate with them over social security, overtime and housing fund payments. In the end, the company agreed to pay out millions of yuan in compensation.

Throughout their 77-day strike, the Foshan jewellery workers were careful not to escalate their action or do anything to unnecessarily antagonise the authorities. Many other workers are now taking a similar approach, with strikers simply staging peaceful sit-ins rather than taking to the streets in protest. In all, CLB recorded 72 such peaceful sit-ins during the last quarter. 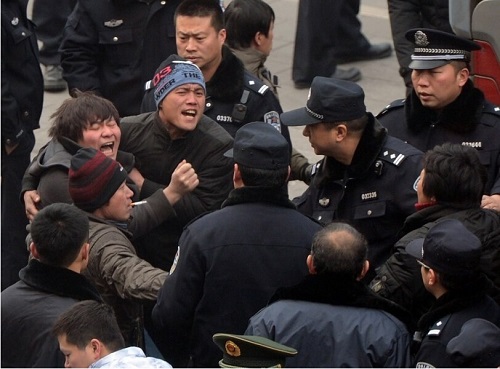 That said, conflicts between strikers and the police are still a regular occurrence across China. See photo above of construction workers protest in Beijing. Police were called to 117 of the strikes recorded by CLB in the third quarter and arrests were made in 31 of those cases.