Nearly 100 serious work-related accidents and more than 200 work-related deaths have been reported in the domestic media since China’s newly revised and strengthened Work Safety Law (安全生产法) went into effect on 1 December 2014.

These incidents have now been entered on China Labour Bulletin’s new Work Accident Map which, like CLB’s Strike Map, will be regularly updated and the data used to analyse trends over time, different industries and in different regions of China.

One of the most serious incidents in the four months since the law went into effect was an explosion at a factory in Foshan at the end of December, which killed 18 and injured 32 workers. Authorities reportedly apprehended several mangers and officials, although there have been no reports of further action thus far.

In January, a tug boat on the Yangtze River sank during testing, killing 22 of the 25 people on-board. The incident drew international attention, as eight of the crew members were non-Chinese nationals from Singapore, Indonesia, Malaysia, India and Japan.

Ten workers were killed and four injured in a collapse at a construction site at Beijing’s prestigious Tsinghua High School in December. Construction of the school’s new gymnasium was underway when a large section of the stadium floor collapsed, burying the workers below. Construction-related incidents were by far the most common, accounting for 40 of the 91 incidents recorded so far. Structural failures and collapses were the most common cause of death or injury for construction workers. 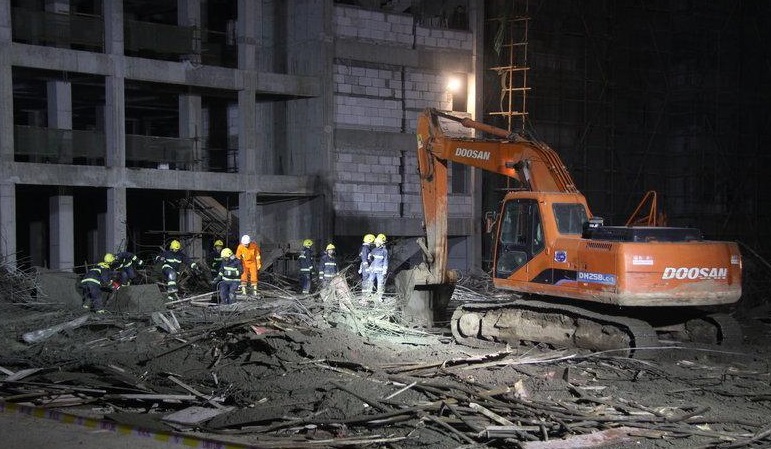 There were 14 mining accidents in this period, including ten in coal mines. The mine accidents often involved collapses, burying workers underground, but explosions and floods were also documented. Manufacturing accounted for another ten incidents, including explosions, exposure to dangerous chemicals, as well as structural collapses.  There were also eight incidents involving sanitation workers, usually workers being hit by cars while cleaning streets and highways. There were four accidents in the storage and logistics industry, and two accidents at steel plants.

Fires have been the cause of some of China’s worst industrial disasters in the last few years. Thankfully, only two fires were recorded in this period although both incidents highlighted the dangers faced by China’s under-paid and often poorly trained fire-fighters. In one case, five fire-fighters were killed and 13 injured in a warehouse fire in Heilongjiang, while another five fire-fighters were injured responding to a fire in Guangdong that took the lives of 17 people in the vicinity.

There were at least 216 deaths and 238 injuries in the 91 incidents recorded since 1 December. This, however, accounts for a very small portion of the total number of workplace accidents in China. The National Bureau of Statistics reported in February that there were a total 68,061 deaths due to work accidents in 2014 or 5,671 deaths on average each month.

The incidents recorded on the map are just those that have been reported in the Chinese media, involve at least one death and or affect three or more workers. Chinese media outlets regularly report on workplace accidents, although there are also cases of employers or local officials trying to conceal or downplay particular incidents.

The revised Work Safety Law substantially increased the fines for individuals and companies responsible for workplace accidents, with the maximum fine for exceptionally serious incidents rising to 20 million yuan. If and when fines are imposed by the courts, that information will be added in due course into the individual incident reports on the map.