American retail giant Walmart has dismissed four employees after they exposed serious food-safety violations at one of its stores in Shenzhen. China’s state-run news agency Xinhua on 16 September described the retaliatory act as “despicable” (卑鄙).

The workers, some of whom had been working at the store for over a decade, talked to the local media on 6 August 2014 about how the store used bug-infested rice and expired meat to prepare food, changed expiration dates on food packages, and used “black oil” for frying.

An earlier television report had shown the thick black oil that was used in the cooked-food department for up to one month without being changed. “My conscience doesn’t allow me (to keep silent),” one the workers who had been employed at the store since 2007 told a Guangzhou newspaper. “I just want the customers to know what they have been eating at Walmart.”

The worker claimed that had he reported the issue to the store’s so-called Ethics Office but the company did nothing. Moreover, most of his colleagues refused to take a stand and chose to turn a blind eye to what they had seen. He was suspended from duty five days after the scandal broke and was later formally dismissed along with three colleagues.

At least three of the workers have now sought arbitration in Shenzhen and are claiming compensation for unfair dismissal. 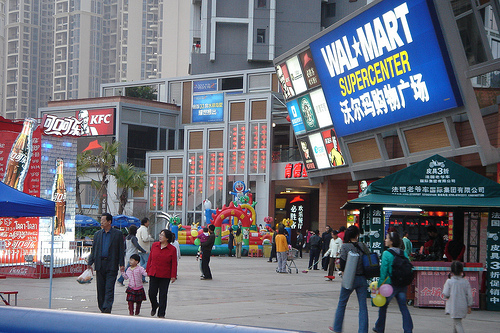 Photograph by DCMaster available at flickr.com under a creative commons licence.

Walmart however claimed that the dismissals were unrelated to the workers’ whistle blowing activities. In a statement issued to the press on 16 September, Walmart said: “We will never allow anyone to violate company regulations... The Company will deal with employees in accordance with the Labour Contract Law and our human resources policies.”

Xinhua meanwhile, in its report condemning the sackings, called for whistle blowers in China to be given better protection from employer reprisals.