There was a significant increase in the number of worker protests in China during the run-up to the Lunar New Year, with factory workers seeking pay increases and untold numbers of labourers demanding wage arrears.

Demands for wage arrears always spike in the weeks before the holiday as migrant workers, especially in construction, clamour for back pay. This year, with the rapid development of social media in China, the extent of the problem became very apparent with one online activist sometimes recording up to 100 protests a day. However, very few of these reports contained sufficient detail to be included on CLB’s strike map.

Of the 71 strikes and protests that we did include during the month of January, 38 were in the service sector and 26 were in manufacturing. Of the service sector strikes, 15 involved taxi and bus drivers protesting administrative charges and rampant unlicensed cars. There was also an upsurge in teachers’ strikes last month as middle school teachers protested pay reform measures introduced by local governments. 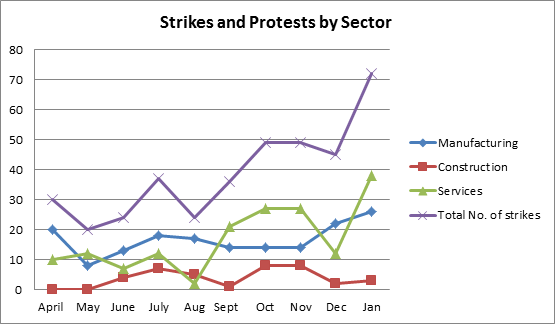 * Note. There were hundreds of construction worker protests reported on social media sites but they nearly all lacked sufficient detail to be included here.

Most of the strikes and protests in factories meanwhile were related demands for pay increases. Continued improvements in the productivity and profitability of the manufacturing sector and indications that consumer prices are rising once again have pushed higher wage demands and also forced regional governments to increase the minimum wage. On 5 February, Guangdong announced it would increase the statutory minimum wage on 1 May to 1,550 yuan per month in the capital Guangzhou, and the following day, Shenzhen announced a 100 yuan increase in its minimum wage to 1,600 yuan per month to go into effect on 1 March.

There were two successful strikes for higher pay at Foxconn factories in January; in Jiangxi on 11 January and in Beijing on 22 January. Workers at Jiangxi Foxconn reportedly got a 500 yuan increase in basic pay to 2,200 yuan per month, prompting a strike for higher pay at another Taiwanese-owned electronics plant in the same city of Fengcheng almost immediately. Foxconn later announced that it would broaden the participation of ordinary workers in its enterprise trade union. However, this announcement was prompted by suggestions from the Fair Labor Association following its audit of the company’s Shenzhen and Chengdu facilities and does not seem to be the result of demands from the workers themselves.

One definite highlight of last month’s worker activism however was the strikes by sanitation workers in Guangzhou, which gained considerable public support and sympathy and eventually forced the city government to promise an increase in pay of around 400 yuan per month on average. However, this success was dampened somewhat when a few days later the government announced that the minimum wage in the city would be increased anyway.