China plans to give another boost to vocational schools

China has announced plans to boost the number of students enrolled in vocational schools and colleges by about 26 percent over the next six years. The current number of 29.4 million students is expected to reach 38.3 million by 2020. See chart below.

This follows a period of stagnation in vocational school recruitment as criticism of the system from all sectors; students, parents, employers and the government, has mounted in recent years.

The number of students enrolled in China’s vocational school system 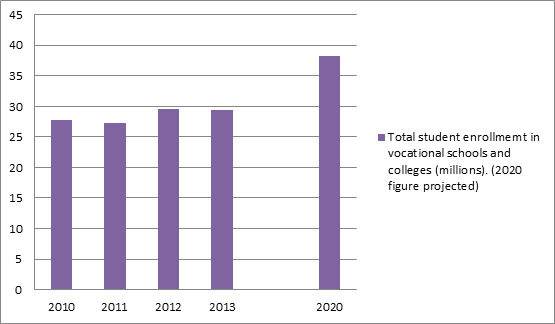 Students and parents routinely complain that China’s vocational schools provide an inferior education which cannot give students the skills they need to embark on a productive career, while employers and government officials complain that schools consistently fail to meet the demands of industry.

The head of the Ministry of Education’s vocational education division, Ge Daokai, explained in the China Daily that many of the 13,600 vocational schools and colleges across China suffered from poor management and infrastructure, limited investment and a shortage of staff.

He stressed that a more effective system needs to be established so that more young people can acquire the skills they need to find employment in the hi-tech and creative industries the government wants to develop. However, the ministry offered no specifics on how it would actually improve the system apart from simply re-stating the government’s existing policy of enhancing cooperation between businesses and vocational schools.

As such, simply increasing the number of vocational school places will likely mean that the well-documented problem of student interns being used by businesses as a source of cheap and flexible labour will actually get worse.

To prevent this from happening, the Chinese government needs to not only upgrade the school system but introduce a broad range of reforms that will protect vocational school interns from exploitation and ensure that internships benefit the student just as much as the employer. These should include; formally recognizing that interns have labour relationship with the employer, that interns receive a reasonable wage directly from the employer and are paid the same statutory overtime rates as other employees.

In addition, employers should be encouraged to provide their own in-house training rather than relying entirely on vocational schools and colleges to do that training for them. For more details see CLB’s report The Mass Production of Labour: The exploitation of students in China’s vocational school system.