The third World Congress of the Building and Wood Workers’ International (BWI) trade union took place in Bangkok earlier this month. And for first time ever, nine Chinese workers joined the meeting to share their fighting spirit with hundreds of colleagues from around the world.

One of the participants, Wang Qingchun, a former employee at the American-owned International Paper factory in Guangzhou, told the meeting about his transformation from an angry worker, whose only recourse to injustice was to organize a wildcat strike, to a labour activist who understands and advocates for collective bargaining and unionisation.

Back then, when the manager shouted ‘you’re fired!’ after I refused to work overtime, I felt extremely helpless. But now after nine months of working in a labour rights organization, I have learned a lot about collective bargaining strategies and the power of trade unions, and I have already begun to share that knowledge with workers at other companies.

By working with local labour rights groups and utilising tools like social media, Chinese workers like Wang are now pioneers in a new phase of the workers’ movement, letting the international trade union movement hear the voices of Chinese workers. As China Labour Bulletin Director Han Dongfang, a keynote speaker at the Congress, noted:

Twenty or even ten years ago, no one could have imagined that Chinese workers would be on the stage at an international labour movement event like this. However, workers in China today are shaking off the label of victims. They are standing up and speaking out for their legal rights. They are getting ready not only to be a part of international labour movement, but to change its dynamic in a fundamental way. 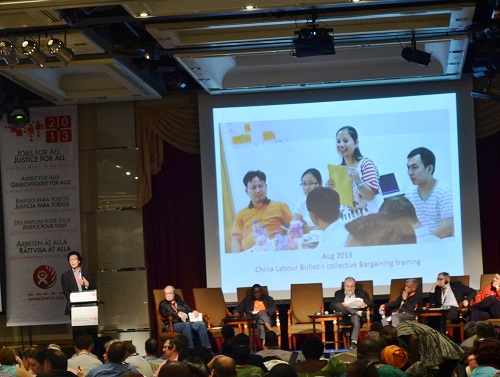 CLB Director Han Dongfang on stage at the BWI Congress in Bangkok.

Almost as soon as they got off the airplane in Bangkok, the workers dove headfirst into a three-day training session, discussing the latest developments in the labour movement, collective bargaining and unionisation in China, with worker representatives, labour rights activists and journalists from around the world. Zhu Xiaomei, a labour activist who works at a Hitachi factory said:

The Congress was a great experience for all of us. We saw how international trade unions are run and how workers in other parts of the world are struggling and fighting for their rights, just like we are in China. I will always remember a quote from the Uruguayan delegate who said: ‘Speak up, or your voice will never be heard!’