Workers in China’s coal, iron ore, gold and silver mining industries have all taken to the streets in protest this year as the economic slowdown continues to impact on mining companies across the country.

The vast majority of protests in the mining industry (25 of the 30 incidents recorded on CLB’s Strike Map since 1 January this year) have been over the non-payment of wages. Other disputes have mainly centred on redundancy payments and low wages etc.

One of the biggest protests occurred in the north-eastern city of Qitaihe on 6 April and involved several thousand coal miners from the state-owned Longmei Group who demanded the payment of three months wages in arrears and two years’ heating subsidies. See photo below. Scuffles with the police broke out as workers refused to disperse. The protest reportedly continued sporadically for at least one week. 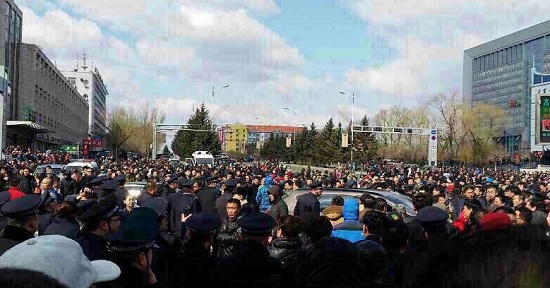 In another incident, on 25 April, more than 600 coal miners near the Shandong city of Jining staged a protest over four months’ wage arrears and the non-payment of pension contributions.

The majority of wage arrears protests occurred in the central-northern provinces of Shanxi, Shandong and Hebei, a region that saw a huge mining boom in the 2000s but is now clearly feeling the effects of the economic slowdown.

The coal industry has been worst hit by the slowdown. China's coal output declined 3.5 percent year on year to 850 million tonnes in the first quarter of this year, the China National Coal Association reported on 13 April. Coal sales volume shrank 4.7 percent to 800 million tonnes in the first three months, while the total losses of China’s 90 major coal enterprises hit 13.1 billion yuan, it said.

There are, in addition, signs that the iron ore industry is experiencing similar problems. Up to a hundred workers at an iron ore mine near the central city of Xuchang staged a protest outside the local government demanding payment of five months’ wage arrears on 22 January.

In a bid to prop up its domestic iron ore industry, the Chinese government is reportedly considering rolling out a nationwide subsidy that would help keep afloat businesses devastated by the dramatic drop in iron ore prices over the last year.