China’s middle class incomes fail to take off in 2017

Expanding China’s middle class was a major theme of the just concluded 19th Party Congress in Beijing but newly released data from employment website Zhaopin.com shows that average wages for white collar workers have remained stagnant for about a year, and that there are huge disparities between higher and lower paid employees. 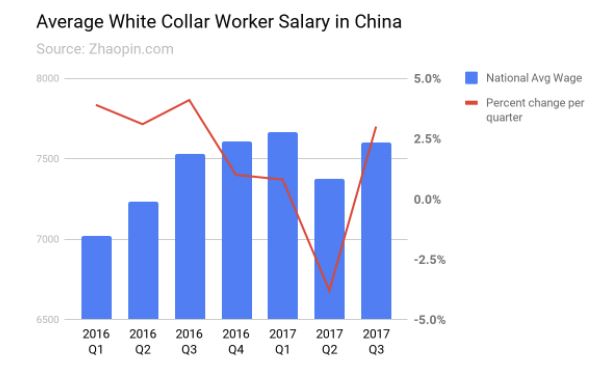 The average white collar wage is still quite high by Chinese standards but the data is skewed by the significantly higher wages of managerial staff in the sample.  The average pay among senior managers sat at 20,019 yuan per month, nearly three times the overall white collar average.

About 70 percent of China’s white collar workers earned less than 8,000 yuan per month and around half were paid less than 6,000 yuan.

Moreover, white collar workers in major cities earned much more than those doing the same job in smaller provincial cities. White collar pay in Beijing was 30 percent higher than the national average and it was 23 percent higher in Shanghai.

As such, clerical workers in smaller provincial cities are unlikely to earn much more than the national average urban per capita income for 2016 which stood at 33,616 yuan, or 2,806 yuan per month.

The growth of a widespread and prosperous middle class is an essential component of China’s Two Centennial Goals: Creating a “moderately prosperous society” by 2021 when the Communist Party celebrates its 100th anniversary, and becoming a “fully developed, rich, and powerful” nation by the 100th anniversary of the People's Republic in 2049.

And officials are well aware that much more needs to be done, even in the short term, to bolster middle class incomes. In his press conference at the 19th Party Congress, Minister of Human Resources and Social Security Yin Weimin emphasized the urgent need to create “high quality” jobs, especially for China’s young graduates.

The All-China Federation of Trade Unions could play an important role in boosting white collar incomes but it would need a radical organizational rethink to do so, focusing much more on industrial and professional unions than enterprise unions as it does now.

As CLB’s 2016 research report on the collective struggle of teachers demonstrated, the trade union has been wholly ineffective in helping teachers and other professionals address their long-standing grievances with management. The report notes:

The majority of state schools in China do have a trade union; however, the role of the union is highly restricted and curtailed by institutional failings.  Schools and colleges in China, like hospitals, research facilities etc. are classified as public institutions (事业单位), and it is the job of the trade union within public institutions to act as a bridge between the Communist Party, management and staff, and ensure that smooth and harmonious labour relations are maintained. In reality, the trade union is merely an adjunct of management and does next to nothing in representing workers’ interests or providing any services that might be useful to teaching staff or other school employees.

The Chinese authorities will have surely noted that in other “fully developed, rich, and powerful” nations, the professional trade unions have played a key role in ensuring the interests of middle class workers are protected.